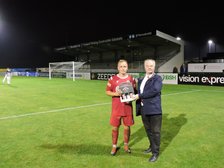 A quick-fire three-goal blast in the first half sent Stamford crashing to defeat against Chasetown on Tuesday night.

The Scholars scored three times in nine minutes in the opening period to defeat the Daniels in the Northern Premier League Midlands Division match.

Although Harry Vince's penalty on the stroke of half-time gave Stamford hope, they were unable to find a way back into the contest in the second half.

The former King's Lynn, Wisbech and Yaxley striker - who was last with Holbeach United - had been recruited to bolster Stamford's attacking ranks with Tom Siddons, Jack Duffy and James Hicks all absent for the midweek match.

It was Stamford who came closest to breaking the deadlock in the early exchanges as Jake Duffy did well to win possession before finding Cameron Johnson who teed up Tendai Chitiza but his vicious strike rattled the crossbar.

Chitiza then went close again as he rounded goalkeeper Curtis Pond before clipping his shot goalwards from a tight angle only for Ryan Wynter to get back and head off the line.

Chasetown then started to impose their attacking authority on proceedings and Dan Haystead had to make a fine save to keep out a curling shot from Jack Langston.

Haystead again reacted well to save from close range from the resulting corner but Arron Ashford was on hand to sweep home the rebound.

The opening strike sparked a goal blitz as Langston added the second six minutes later when his inswinging free-kick eluded everybody in the box and nestled in the far corner of the Stamford net.

It then got worse for Stamford when Chasetown's third goal followed shortly after as Daniel O'Callaghan raced clear to steer his shot beyond the advancing Haystead.

A last-gasp goalline clearance from Connor Bartle then prevented Liam Kirton from adding a fourth goal before Stamford started to regain their composure.

They were then thrown a lifeline on the stroke of half-time when goalkeeper Pond clattered into Matwasa as the winger burst into the box and Vince stepped to calmly convert the resultant spot kick.

Haystead still had to save well to thwart Ashford in first half injury time before Stamford made a change at the break as Mike Armstrong replaced Ed Cook.

The hosts created a good opening at the start of the second half when Chitiza and Bartle combined well but the full-back dragged his shot wide.

Langston then went close for the Scholars but Haystead got a vital touch to his close range shot the Stamford custodian then saved bravely at the feet of Kirton with Langston lifting the rebound onto the roof of the net.

Frew and Rodrigo Goncalves were then introduced to add to Stamford's attacking artillery but, despite having the lion's share of possession, clear-cut chances were at a premium against a resolute Chasetown rearguard.

Stamford's urgency to try and force another goal was at the sacrifice of their quality as Chasetown comfortably dealt with anything thrown at them as the Daniels fell to their second league loss in three games.