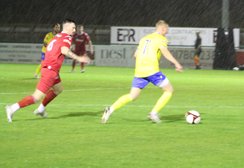 Stamford staged a stirring second half fightback to secure a share of the spoils with league leaders Halesowen Town on Tuesday night.

The Daniels had found themselves trailing by two goals at the break despite a promising first half performance against the unbeaten Yeltz.

But strikes from James Blunden and Cosmos Matwasa's late leveller capped a rousing second half display that left manager Graham Drury thrilled with the all-round efforts of his players.

He said: "Even though we were two goals down at half-time, I was pleased with the performance.
"I was still that confident at half-time that we could win the game 3-2. The next goal after the break was always going to be crucial and we had to replicate the intensity and determination which we had put in during the first half.
"I think we did that from the minute dot. We got a fantastic goal to get us back into the game and it was all us. We were on the front foot.
"We are now starting to look a bit fitter and sharper and it was a fantastic equaliser. We also had a couple of chances to get the winner.
"We had a couple of scares which you're going to get against a quality side like Halesowen but they know they've been in a tough game.
"We had to keep believing and pushing right to the end and the boys were superb."

And the Daniels got off to the worst possible start when Halesowen hit the front inside the opening 90 seconds.

The Daniels looked for an instant response and Cameron Johnson fizzed a shot just past the post before home goalkeeper Dan Wallis had to get down smartly to save after Lait and Finn had again linked well.

Johnson was just unable to get a clean connection on a cracking cross from Connor Bartle as Stamford continued to threaten before the Yeltz doubled their lead on the half-hour.

Robbie Bunn's corner picked out the unmarked Harry White at the far post and he headed home to increase the visitors' advantage.

Stamford continued to look for a way back into the contest and Mike Armstrong sent another effort whistling past the post before his next well-struck effort was spilled by goalkeeper Daniel Platt.

Johnson was first to the rebound and teed up Jake Duffy who shot an awkward effort over the bar as Halesowen held their two-goal lead at the break.

Stamford came out with all guns blazing after the restart and created a couple of early opportunities as Joe Butterworth curled an effort just wide of the far post before Duffy had another strike deflected for a corner.

From the resultant flag kick, Elliott Cook saw his glancing header athletically tipped away by Platt but Blunden was first to the rebound to fire home and halve the deficit.

Blunden had another header that landed on the roof of the net before Matwasa was denied by Platt.

A superb inswinging corner from Bartle then eluded a posse of home players as Stamford kept pushing for an equaliser.

It did leave them vulnerable on the counter-attack and Halesowen had a couple of good chances to put the game beyond the Daniels.

Wallis did well to deny the lively Lait with another tidy stop in tricky conditions before Cook was in the right place to clear Jamie Molyneux's effort off the line.

A driving run into the box and shot was then deflected onto the home crossbar with Stamford managing to scramble the ball to safety.

The home side again responded and their sustained spell of late pressure was then rewarded with three minutes remaining when substitute Jon Challinor fed the ball through to Matwasa who rifled home a fine finish into the roof of the net.

Stamford then pushed for a late-gasp winner but the final pass or touch just eluded the hosts as Halesowen held out to maintain their unbeaten record while Stamford stay just outside the play-off places in seventh spot.