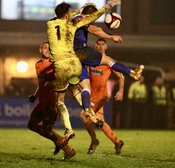 Stamford saw their 11-match unbeaten run shattered as they missed the chance to move into the Northern Premier League Midlands Division play-off places on Monday after a home defeat against Yaxley.

Jack Duffy had given the Daniels a first half lead in front of a fantastic festive crowd of 624 at the Zeeco Stadium. However, Cuckoos came back after the break with Harmeed Ishola's second half double securing a fourth successive win for Yaxley.

Stamford - sporting their blue away kit as part of a league initiative for the Shelter No Home Kit campaign - had Cameron Johnson back in their starting line-up with Cosmos Matwasa ruled out through injury. Both teams went into the derby duel on the back of a decent run of form and it was the Cuckoos who enjoyed the better of the early exchanges as Bradley Gothard saw a header from a corner cleared off the line by Jake Duffy.

Matt Sparrow then flashed a shot wide before ex-Stamford player Dan Cotton fizzed another effort past the home goal. Stamford responded with Jack Duffy sending a first-time shot from a Tendai Chitiza cross narrowly over the crossbar before Cameron Johnson saw his strike brilliantly blocked by Connor Peters after a strong run from Rob Morgan had created the opening.

Haystead then had to be at full stretch to tip over a well-struck effort from Sparrow before his opposite number Will Lakin made a sublime save to turn over a goalbound header from Johnson. Jake Duffy then drilled a shot just wide before Stamford took the lead just before the half-hour mark.

Morgan was the creator with an inch-perfect pass to set Jack Duffy free and he rifled home a low shot into the bottom corner of the Yaxley net. Lakin again excelled moments later to prevent Stamford from doubling their lead with a point-blank block to thwart the incoming Chitiza.

Yaxley finished the opening period strongly and Florian Tsaguim failed to bring a Spencer Tinkler flick-on under control with the goal at his mercy. Haystead then made a brilliant block to deny Cotton at close range with Ishola heading over from the resultant corner. Stamford looked for the vital second goal after the break and James Blunden headed just wide from a Morgan cross while Chitiza dragged another effort past the post. The Cuckoos then rocked Stamford as Ishola burst down the right-hand side and cut into the box before clipping a sublime strike into the top far corner of the home net just ahead of the midway mark in the second half.

A second goal then followed with 10 minutes remaining as Blunden's under-hit back pass was intercepted by Ishola who raced clear to slot home past Haystead. Stamford then piled on the pressure in the latter stages with Gothard again putting his body on the line to keep out a Chitiza shot while substitute Rodrigo Goncalves saw his curling effort palmed away by Lakin.

Joe Burgess headed wide from a corner following another vital Gothard block before Zayn Hakeem had the final opening as his curling cross-come-shot was bravely turned away by Lakin who flung himself into a posse of bodies to deny the Daniels.