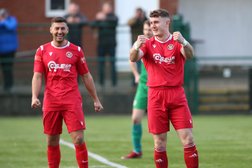 The Daniels secured all three points with a comprehensive win over Bedworth United.

Stamford visited the Oval for the first time since there play off defeat to the Greenbacks in 2018.

Manager Graham Drury missed the game due to illness, but the Daniels were able to field an unchanged side that beat Chasetown the previous week.

Stamford took the lead on two minutes. Bedworth were awarded a free kick for a foul, but the ball was played across the back where Jack Duffy robbed the defender and slotted the ball past the Bedworth goalkeeper.

The Daniels continued to press, and they doubled their lead on nineteen minutes when Tendai Chitiza robbed the right back of the ball, and he played the ball into Jonathon Margetts. The Daniels forward turned the defender, and his shot went in off the post.

The home side were reduced to ten men on thirty-six minutes. Ryan Moore was adjudged to have fouled Margetts on the edge of the box. The referee consulted his assistant and then showed Moore a red card. From the resultant free kick, Margetts put the ball over the bar.

Into the second half and Stamford continued on the front foot.

Three minutes into the half and Jake Duffy fired in a free kick but his effort was cleared at the expense of a corner.

Then Connor Bartle drove down the left and crossed the ball into the box, unfortunately, the ball was cleared for a corner with Margetts waiting to strike.

Just after the hour mark, Bartle again crossed the ball from the left and this time he found Cosmos Matwasa but the winger put his shot over the bar.

Midway through the half, Liam Lockett had a shot which Dan Haystead did well to save with his feet.

On seventy-three minutes, Stamford completed the scoring when Tendai Chitiza found substitute Rodrigo Goncalves in the penalty area and the young forward had to adjust his body, but his acrobatic effort was fired into the ground before bouncing up over Sam Lomax in the home goal.

Stamford almost had a fourth in the dying minutes when Goncalves found himself in space but he put his effort just wide of the goal.

The result now means, Stamford are six points behind the leaders with seven games to go.