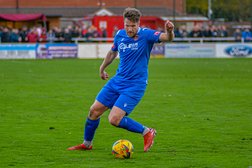 Stamford progressed to the first-round proper of the Buildbase FA Trophy with a comprehensive win over step 3 side Stourbridge.

Both sides started brightly with crosses in the box but nothing to trouble either goalkeeper.

Stamford took the lead on eight minutes when the ball fell to Tendai Chitiza who burst into the penalty area. His reverse ball found Tom Siddons and the Daniels striker slotted the ball through the keeper’s legs to score his seventh goal of the season.

Stourbridge opportunities were limited but a quickly taken free kick saw the ball crossed into the box for Alex Nicholls but under pressure he put his effort wide of the goal.

Midway through the half, Stamford had a great opportunity to double their lead. Chitiza put in a cross from the left and Rob Morgan at the back post managed to miss the ball with the goal at his mercy.

Any chances that the home side had were quickly snuffed out by a well marshalled Daniels back line.

The Daniels did double their lead with ten minutes of the first half remaining when Cosmos Matwasa fed the ball to Chitiza and he took the ball in his stride and fired the ball into the roof of the net. Stamford were attacking at will now and Matwasa nearly set up a third for the Daniels as his cross from the bye line was met by Jon Challinor whose shot was saved at point blank range by Charlie Price in the home goal.

In the second half, Stamford nearly had a third when a long throw created a bit on pinball in the home penalty area before Rob Morgan poked the ball past Price in the Stourbridge goal but his effort came back off the post.

Stourbridge continued to look for a way back into the game but they were limited to long range efforts, first Alex Fletcher had an effort just wide of the goal. Then Chay Tilt had an effort, but his effort was straight at Dan Haystead.

Stamford continued to press, and Connor Bartle had a strong run down the left and he fed the ball to Morgan, but the Daniels midfielder could only fire his shot straight at the Stourbridge keeper.

The home sides task got a lot more difficult with eight minutes remaining when captain Brad Birch was sent off after receiving a second yellow card.

The Daniels finished the scoring in the 89th minute when Cosmos Matwasa was fouled in the penalty box. Rob Morgan stepped up to fire the ball into the bottom right-hand corner of the goal.