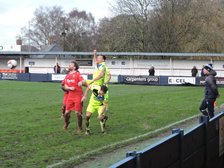 After six weeks of inaction the Daniels returned to playing by taking on league rivals Kidsgrove Athletic in the FA Trophy.

The Daniels made two changes to the team that beat Stourbridge at the end of October with James Hicks replacing Jon Challinor and Max Peverell making his first team debut to replace the injured Dan Haystead.

Daniels wide man Tendai Chitiza was on the receiving end of a couple of robust challenges which brought out the yellow card for the guilty party on the home side.

Stamford grew into the game Rob Morgan was the first to test the home goalkeeper with a shot.

The Daniels took the lead 10 minutes before half time. Tom Siddons raced between two Kidsgrove defenders to poke a shot goal wards. This was blocked by the home keeper. The ball came out to Connor Bartle who played the ball to Rob Morgan. He threaded the ball to Chitiza whose shot was blocked by the keeper, but Siddons was alive to the rebound and poked home from close range.

At half time, Stamford were forced into a change with Tendai Chitiza unable to continue so he was replaced by Harry Vince.

Both sides continue to play football, but this was difficult due to the wet conditions underfoot.

On the hour mark, James Hicks unleashed a shot from distance which rattled the Kidsgrove crossbar.

Then came a moment of madness on both sides. First, Josh Thorpe was given a second yellow card for a late challenge on Max Peverell. Then Daniels captain who was warming up alongside the pitch was confronted by a supporter. The referee then showed him a red card as well.

Jack Duffy then had a great chance to increase the lead for Stamford when he broke through the Kidsgrove back line but he fired his shot wide of the goal.

The Daniels then rounded off the win when Harry Vince scored with eight minutes remaining when he powered the ball home following a shot saved by the Kidsgrove keeper.