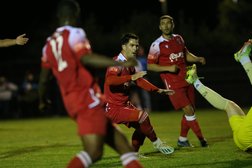 Two headers from setpieces sent Stamford tumbling out of the FA Trophy at the Zeeco Stadium on Tuesday night.

Ryan Wynter and Daniel O'Callaghan netted the crucial goals for visiting Chasetown who defeated their Northern Premier League Midlands Division rivals to secure victory in the first qualifying round clash.

Although Jon Challinor pulled a goal back for Stamford in the final stages of the contest, their strong finish to the tie was too little too late as the Scholars secured a trip to Boldmere St Michael in the second qualifying round.

The match had been Stamford's first outing for 10 days following the postponement of Saturday's scheduled staging as a mark of respect after the passing of Her Majesty the Queen.

Goalkeeper Dan Wallis made his first start of the season for Stamford who also welcomed back skipper Sean Wright as the Daniels made five changes from the FA Cup reversal at Bromsgrove Sporting.

Mike Armstrong, Jack Duffy and Connor Furey also came back into the starting line-up, but it was Chasetown who shrugged off any effects of the 170-mile round trip from Staffordshire with a solid start to the tie.

They took the lead after just six minutes as Kris Taylor's inviting free-kick into the box was headed home by centre-half Wynter.

It was to prove the only real clear-cut chance of the first period as Stamford struggled to make an impression on their visitors.

Jonathan Margetts had a couple of penalty appeals turned down while Joey Butlin had a decent opening for the Scholars but shot over.

Luke Yates sent an effort wide from a Mitchell Botfield cross early in the second period before Stamford made a double change on the hour mark.

Challinor was then introduced shortly after as Stamford looked to take the game to their visitors in a search for an equaliser.

Terrific tackling from Joe Burgess - who had been moved in midfield - created an opening for Margetts whose effort was blocked by Pond with the Stamford striker seeing his deft header from the resultant corner deflected past the goal.

Jack Duffy rifled a sweet strike narrowly over the Chasetown crossbar before Wallis did well to tip away a well-placed Butlin free-kick at full stretch.

Chasetown then doubled their advantage with 14 minutes remaining as a corner was well executed by Taylor and O'Callaghan was first to react with a thumping header into the home net.

Stamford responded well and had their best spell of the contest as they looked for a way back into the match with a period of prolonged pressure.

It paid off with four minutes remaining as Johnson's run and cross from the left picked out the incoming Challinor who guided his finish beyond Pond.