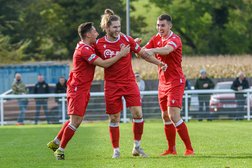 A depleted Daniels side progressed to the next round of the FA trophy and ending Belper Town’s unbeaten start to the season.

Stamford were without captain Cleveland Taylor and strike duo James Hicks and Tom Siddons along with midfielder Dec O’Hare. This meant a rare start for Ollie Brown-Hill & Pearson Mwanyongo.

The Daniels started the game on the front foot and Rob Morgan flashed the ball across the Belper penalty area, but Brown-Hill could not connect with the ball. Then Brown-Hill had a chance to open the scoring which Ryan Musselwhite in the home goal split but only at the expense of a corner. He was causing the Belper defence lots of issues in the opening period with his running at defenders.

Belper’s first chance of the game came after 33 minutes when a corner was swung in from the right and Alex Peterson flashed a header wide of Dan Haystead’s goal.

Stamford were testing the Belper keeper with shots from distance and Tendai Chitiza had a shot over the bar from distance.

The Daniels made their pressure tell a couple of minutes before half time. Some great build up play saw Ollie Brown-Hill feed an overlapping Jon Challinor and he slotted the ball past Musselwhite and the near post for Challinor to record his 99th career goal.

At the start of the second half, again Stamford started brightly and Chitiza almost doubled the Daniels lead when he slotted the ball past the Belper keeper, but the ball bounced off the post and was cleared for a corner.

Belper then had an opportunity to level when a cross from the right was headed goalwards but Dan Haystead was equal to it and pushed the ball away for a corner. Harry Vince then broke into the Belper penalty area and unleashed a shot after Chitiza and Matwasa combined to set up the midfielder.

Belper almost got an equaliser when Peterson fired a shot goalwards from 30 yards but Haystead was able to back peddle and tip the ball over the bar.

Stamford did double their lead on 62 minutes when they were awarded a free-kick to the right of the penalty area. Ollie Brown-Hill stepped and with possibly people expecting a cross the Daniels forward went for the far post and ball beat the keeper and went in the top corner of the goal.

The Daniels effectively settled the tie a minute later when Mwanyongo crossed the ball from the right and he found Cosmos Matwasa at the far post the winger headed the ball into the net.

Stamford had a further chance through Vince whose shot was saved by the Belper keeper.

Late on, Belper had a chance for a consolation but Sean Wright was able to block the shot and record a good win and a clean sheet for the Daniels.