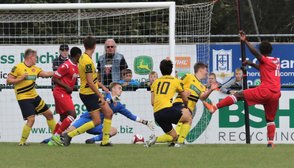 Manager Graham Drury saluted the strength of his Stamford squad as the Daniels defied the absence of five key players to make FA Cup progress on Saturday.

They went into the clash against Witham Town without the services of unavailable strike duo Tom Siddons and James Hicks, the injured centre-half pairing of Sean Wright and James Blunden plus the suspended Harry Vince.

But Cosmos Matwasa's first half strike secured a place in the second qualifying round for the Daniels who handed first starts of the season to the impressive Jack Keeble, Charlie Ward, Mike Armstrong and Pearson Mwanyongo.

Boss Drury said: "I don't think people quite understand how difficult it is when you've lost the spine of your team.

"It was perhaps our best result of the season when you look at it on a whole.

"We've had 20 minutes working with two new centre-halves, Jordon Cooke has only just come back and we've had to completely change the shape.

"There's been lots of swaps and changes. Tendai Chitiza has played up front and has done fantastic up there with his work-rate and commitment.

"He's won us a lot, his hold-up play has been good while it was perhaps Pearson's best performance for me as a manager.

"He didn't do it with his feet, but it was what he did off the ball. He's probably thinking in his own head that he's had a poor game, but I think it's important that players understand when it's not going well they've got to dig in for the team and Pearson did that.

"I was also pleased to keep a clean sheet with a new back four together. We love our clean sheets.

"But I do think we dropped down a level in possession of the ball. We wasn't as lively and as productive as what we have been.

"It wasn't quite as expansive. We didn't get the ball into the wider areas as much.

"We've got to understand that we can't believe our own hype of winning these games and just be drifting through them because you can get complacent and it's my job not to let that happen.

"Keeble, Ward and Armstrong all came in and looked like they had been out there and played every minute of this season though.

"The whole team collectively was very good and all credit to the lads in the changing room. We had to stiffen the spine so, as a squad, it shows the strength in depth.

"People said to me why I am adding this, what am I bringing this in for, but this proves that it comes to the front. We need it.

"I thank the club for giving us the support. We're in it together and winning in the FA Cup is fantastic for everyone."

Stamford were the dominate side in the opening period against a Witham team who are currently 15th in the Isthmian League North Division.

Rob Morgan saw an early strike blocked while Cooke cracked an effort narrowly over at the back post.

Dan Haystead had to get down smartly to turn away a Jettluke Hogan hit but, apart from a couple of routine catches, that was as busy as it got for the Stamford number one in the opening period.

Stamford continued to threaten at the other end with Chitiza thriving in his central attacking role while Cosmos Matwasa was a regular raider on the Witham goal.

Morgan made another strong run but his low shot was easily gathered by George Marsh in the Witham goal.

Chitiza then got the better of Marsh in an aerial battle for the ball and his back post cross picked out Cleveland Taylor who volleyed just wide.

Stamford finally found the breakthrough in the 27th minute as Keeble challenged for a ball into the box from a corner.

The ball fell for Matwasa who swiftly moved past one challenge before drilling a low shot into the bottom corner of the Witham net.

The Daniels maintained their peppering of the Witham goal for the remainder of the first half with Matwasa and Chitiza both again going close to doubling the lead ahead of the interval.

Chitiza produced a fine individual run at the start of the second period only to be denied by the legs of Marsh as Stamford continued to push for a second goal.

However, that second strike continued to prove elusive and Witham came more into the contest as the match wore on.

Haystead had to produce a flying save to keep out a stinging shot from George Bugg before keeping calm under pressure to collect a series of corners as Witham enjoyed their best spell of the game.

As they pushed for an equaliser, Stamford had the better openings to add to their tally late on as Morgan was denied by a superb last-ditch tackle from Key Jude before substitute Ollie Brown-Hill was thwarted by the finger-tips of Marsh.

Oliver Bell had an injury-time half-chance for the Essex visitors, but his effort was easily gathered by Haystead as Stamford secured their place in Monday's draw with a sixth win from seven games in all competitions so far this season.