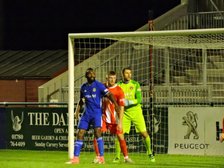 Man of the moment Pearson Mwanyongo fired a late winner to send Stamford into the next round of the Integro League Cup on Tuesday night. Writes James Bedford

Mwanyongo followed up his double strike in Saturday's league victory over Lincoln United with the match-winning goal with five minutes remaining of Tuesday's tussle with league rivals Peterborough Sports.

Both sides rang the changes for the first round clash and Daniels boss Graham Drury felt the match 'ticked all the boxes' for his side who are now unbeaten in eight games and still undefeated at the Zeeco Stadium this season.

Drury said: "I'm pretty pleased because it's another win and another clean sheet which maintains our momentum.
"It was great to see Joe Burgess back from the injury and getting some minutes under his belt.
"Lee Clarke and Pearson Mwanyongo both played the full 90 minutes as well which was important for their fitness.
"We've showed our strength in depth as well. Sam Hollis has come in and I thought he was outstanding.
"He's got a great attitude. Sam, John King and Scott Sandy have all worked really hard to get the ball back for us.
"We're into the next round, haven't picked up any injuries, so the game has ticked all the boxes for me."

In a low-key opening period, Daniels debutant Clarke came closest to breaking the deadlock as he found space to unleash a cracking strike that rattled the post.

Lewis Webb fired over for the visitors while ex-Daniel Josh Moreman tested the reactions of home goalkeeper Dan Haystead with an audacious effort from an acute angle.

Avelino Viera glanced a header wide after Moreman's cross had created a decent opening while Haystead did well to dive full length and palm away a stinging drive from Moreman.

Hollis nearly broke the deadlock for the Daniels after the break, but was denied by Sports custodian Dan George who kept out his close range effort from an Eliot Putman cross.

Half-time substitute Jon Challinor fired a decent effort just over the bar before Ben George did well to block a goalbound effort from always dangerous Moreman.

Just as the match looked to be heading to penalties, Mwanyongo conjured up the crucial opening that settled a close contest.

Latching onto a ball into the box, Mwanyongo kept his cool under pressure from a posse of Sports defenders to create space and then slide home past the advancing George and book Stamford's place in the second round.