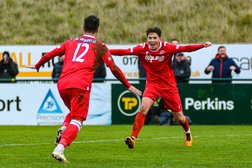 Jon Challinor hit a late winner to secure Stamford's place in the next round of the FA Trophy after a 2-1 derby success over Lincoln United on Saturday.

The Whites had cancelled out Tom Siddons' first half opener through Matt Cotton's 76th minute penalty.

However, the Daniels needed just four minutes to regain the lead as second half substitute Challinor hit home a cooly-collected finish to send Stamford into Monday's draw for the third qualifying round.

The Daniels had made a number of changes to the side which started Tuesday night's 1-1 draw at Carlton Town.

Joe Burgess, James Hicks and Jack Duffy all came into the starting line-up with Cosmos Matwasa and Tendai Chitiza both on the bench while Rob Morgan was missing due to a sickness bug.

The changes didn't affect Stamford in the opening moments as they created the better opportunities before Lincoln came back strongly as the half wore on.

Siddons twice headed wide, firstly from a Connor Bartle cross and then after Jack Duffy had won the race with Whites goalkeeper Michael Antkowiak for a loose ball in the box.

The deadlock was then broken after 14 minutes when a strong surge down the right from Harry Limb saw him pick out Siddons for a typical emphatic close range finish from Stamford's top goalscorer.

Stamford looked to add to their tally as Harry Vince's first-time pass found Limb in the box but Antkowiak was quickly down to save.
Duffy sent a shot wide while skipper Sean Wright soared highest to meet a Vince corner only to head just over the crossbar against his former club.

Burgess was next to go close for Stamford as he won a crunching tackle in midfield and then burst forward only for Antkowiak to tip his goalbound shot over the crossbar.

Lincoln came more into the contest as the half wore and had the better chances in the latter stages of the first period.

They won a succession of corners after some last-ditch Daniels defending before goalkeeper Dan Haystead made a couple of top-drawer saves to ensure Stamford went in at the break a goal ahead.

Haystead foiled Matt Cotton at the back post with a close range block before denying Callum Chapman with a brilliant block.

Rob Smith then tested the home goalkeeper with a stinging shot but again Haystead was equal to test with another impressive stop.

Neither side were able to assert their authority on proceedings in the early exchanges of the second half as Stamford made three substitutions within the opening 15 minutes of the restart.

One of those replacements - Dec O'Hare - came close to doubling the Daniels' lead as his excellent run and shot went narrowly over the Lincoln crossbar.

Cotton blazed over a half chance at the other end before Lincoln got back on level terms from the penalty spot.

Despite skipper Wright laying down injured on the halfway line, play was allowed to carry on and Jordon Cooke was adjudged to have fouled Jack McMenemy in the box.

Cotton - who had scored a penalty in the league meeting earlier this month - stepped up to score from the spot after sending Haystead the wrong way again with 14 minutes of the match remaining.

Parity lasted just a couple of minutes though as Stamford quickly regained the lead.

Challinor and Siddons both had shots blocked with the ball rebounding back to Challinor who hit home a sweet finish into the bottom corner of the Lincoln net.

Stamford then safely negotiated the final stages which included six minutes of injury-time to maintain their excellent start to the new campaign.