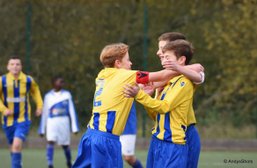 Stansfeld got their first league win of the season with a 5-0 win over Meridian VP. Goals from Macey Malyon and a brace each from Joe Minter & Billy Parkinson saw Stansfeld run out comfortable winners.

Stansfeld OBC lost 3-2 to Borden Village a first half brace from Billy Shinners saw Stansfeld 2-0 up at half time but the visitors came out strong in the second half a left with all three points.

Stansfeld OBC Vets lost 4-2 to The Charcoal Vets; the opposition fielded a number of ex-Stansfeld players in a highly contested game.

Stansfeld U14s remain unbeaten with a 4-2 win over Lewisham Borough; a goal for Oliver Tadiwanashe and a Hat-Trick for Luke Almold.