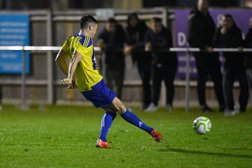 Stansfeld, made it 2 penalty shootout wins from 2 by beating Knaphill of the Combined Counties Division 8-7 on penalties. After a keenly contested 2-2 draw in the FA Vase at Foxbury Avenue.

The home side struck first, Ollie Milton tapping home on 4 minutes after Billy Shinners had squared him in, with Knaphill stopper Cameron Kennedy stranded in no mans land.

Stansfeld controlled opening passages of play effectively and restricted the visitors from Surrey to half chances.

Though, they did put together an excellent move with 18 minutes played. Azeez Alabi picking the ball up and striding forward, then finding Ross Murdoch who cleverly backheeled the ball into the path of full back Connor Holland, He took a touch before forcing Charlie Cottrell in goal to tip his effort on to the post before the ball was cleared.

The half settled into a steady rhythm with the hosts looking to press the advantage and the visitors looking to get back into the game. Stansfeld’s Macey Malyon had the best chance of the rest of the half, meeting a ball from the right hand side on the volley, forcing an top notch stop out of Kennedy in goal to keep the deficit at 1-0 as the half drew to a close.

The second half began with Knaphill looking fired up by whatever was said in the team talk. It seemed to work as with 51 minutes played Timmy Taylor restored parity, stopping to meet a ball at the back post after Charlie Cottrell in the Stansfeld goal had missed his catch on the initial cross.

Taylor went close to adding his tally shortly after. A free kick central & 40 yards out, he put his laces through it & was denied a spectacular goal by the outside of the upright. The Knappers’ were very much in the ascendancy at this point.

However, it was Stansfeld who took the lead against the run of play. A long ball towards the back post found Ollie Milton, who skipped inside and fired a shot which wasn’t held. Ryan Hassan was on hand to slam home on the rebound and put the home side back into the lead.
The game died down for a period after this with the only real threat to either goal coming courtesy via set pieces, Timmy Taylor of Knaphill going closest for either side.

Stansfeld seemed to be heading for the next round until the last minute of normal time. Knaphill centre forward Daniel Taylor won the ball high in the opposition half and found himself 1 on 1 with the keeper who saved his initial effort but couldn’t do anything with the rebound as Taylor picked the ball up and skipped round him to slot home into an empty net. Much to the protests of Stansfeld who felt that Taylor had committed a foul in the initial challenge to win the ball.

We were heading for penalties. After an excellent game with both sides giving good accounts of themselves.

Both sides it must be said have some excellent penalty takers in their ranks. The unfortunate man was Youssef Al-Arabi his penalty clanging off the crossbar at 7-7 in the shootout. Stansfeld converted after this to advance through and face a trip to Alford on the 10th October.