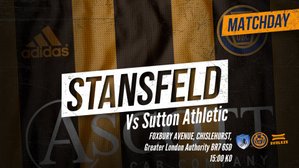 Back to Back League Wins

Stansfeld’s good form continued after last week’s convincing 5-0 home win to Meridan VP. Stansfeld looked to continue that form against Sutton Athletic in wet blustery conditions; Stansfeld battled hard in the first half with the Foxbury slope and the wind against them and at the break the game was goalless.

In the second half, with the slope in their favour and the wind on their backs; Stansfeld looked to make this advantage count. Although Stansfeld missed a couple of good chances, they continued on the front foot and were rewarded for their efforts in the 70th minute. Freddie Cray hit a shot from long range that the Sutton keeper struggled to hold onto, and Macey Malyon knocked home from close range. Stansfeld did not have to wait to long for their second; just four minutes later Ross Morley picked up the ball just outside the Sutton area and he cooly slotted the ball home to put the host 2-0 up.

In the 87th minute, the points were secured when captain Sam Ryan scored a contender for goal of the season. Picking the ball up in his own half he looked up to see the Sutton keeper off his line and lobbed him inside his own half to make it 3-0. Stansfeld kept going and some great work from Macey Malyon and Ollie Milton saw the ball drop to Ross Morley who smashed home his second and Stansfeld’s fourth. In the 90th minute with the last kick off the game, Sutton got a consolation goal when winger Jordan Samuels cut in from the right and produced a fine strike leaving Stansfeld keeper Cottrell no chance.

Although it was a good victory Stansfeld left the pitch disappointed that they hadn’t kept a second successive clean sheet. But with 9 goals scored and only 1 conceded in the last 2 games, Stansfeld go into this week’s FA Vase First Round fixture in confident form.