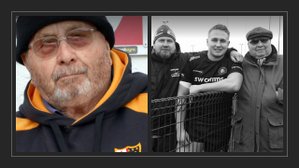 St Austell RFC mourns the loss of a Club stalwart

It is with much regret that we share news of the sad loss of Norman Cowley. Our thoughts are with the Cowley family.

St Austell RFC sends sincere condolences on behalf of all members and players to Norm’s wife Marie, his son Neil, grandson Ethan and daughter Sharon and grandchildren Holly and Jack.

The Club played a big part in his life and he volunteered for many roles, if it needed doing Norm would put his hand up. Cleaning the changing rooms, washing all the kit and looking after the sponsorship for the club, no task too small. His contributions to the Club were really appreciated and were recognised by the award of Life Membership of St Austell RFC

Son Neil was a renowned prop for the Saints and Norm watched his grandsons Jack and Ethan with pride as they progressed through the Youth sides. Ethan has gone on to play representative rugby at national level which was a source of immense pleasure to Norm.

Norm was ever present at Tregorrick on match days and was much loved by his fellow supporters and players. Norm held court in a prime position in the stands under the balcony behind the home dugout. His dry razor-sharp wit was a big feature of the Saints match day experience and his presence will be sorely missed. It will certainly feel very different on the touchline without Norm’s words of encouragement from behind the dugout!