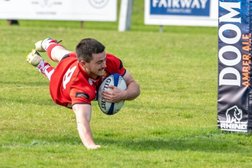 Saints Sizzle in the Sun at Tregorrick!

Preceded by a Ladies Day, and an impeccably observed minutes silence to mark the 20th anniversary of the 9/11 terror attack, Saints supporters sat in the still-filling stands held their breath, as we waited for the Saints to run out after a 546 day break from full contact league rugby. Many questions were left unanswered after the first outing at Devonport Services, so would we see a different performance on home turf?

Matt Shepherd, swapping the 15 shirt for 10 this week due to Chris Ashwin picking up an injury at Devonport, gave the Saints chasers a perfectly weighted kick off, and Bullen was able to challenge and win that ball on the hoof, a fantastic start and whilst quite small in itself, it all helps to calm the nerves. The Saints forwards swarmed around him as protection as he went to ground. The ball was recycled across the pitch and back before Keynsham were penalised at the ruck just outside their 22. Shepherd kicked to touch and, still inside the first 2 minutes of play, Saints assembled for a line out. The take was clean, the ball moved to the back where Noott waited, and the drive was on. It took a while to get going and moved laterally infield for a while before some Keysham forwards were forced to disengage, then it straightened up and Noott grounded the ball. Shepherd added the conversion. 7-0 after 2’.

Keynsham took a breath and enjoyed some time on the ball, not afraid to spin wide and mix it up with some forward play on the crash but the Saints defence held, eventually forcing a knock on and the first scrum to Saints. Keynsham got a nudge on but largely the scrum held, another nervy first in this game ‘done’. Kyle Marriott started an ‘8, 9 then 10’ move and the ball went wide to Konnor Ewudzi at outside centre, getting the Saints out of their own half and to where play remained until the 12th minute when Saints won a penalty in what could be considered a kickable position, to the right of the posts and 10m outside the Keynsham 22. Shepherd kicked to touch for another catch and drive opportunity. This time it came to naught as Saints knocked on and Keysham cleared.

Play and possession remained evenly distributed until Keysham get a penalty from a Adam Kellow high tackle. They kick to the 5m line, but Saints steal the lineout then knock on, then Saints steal from the scrum after it pops out Keynsham side and clear, indicating that Saints were competing hard for everything!

It took 23’ for Keynsham to get on the scoresheet. They won a line out on the Saints 10m line and spun to fly-half J Kendall, who deftly chipped the ball over the back line and wide towards the corner flag. It was tracked back well by Full Back Cavan Boyer but the bounce was unexpected and frankly unkind, favouring Keynsham's Moody who caught and went to ground to score. The conversion was missed. 7-5 after 23’.

The play from then until half time was punctuated by a concussion injury to Keynsham Flanker J Josham who had to leave the field but thankfully looked ok, by the referee Harry Groves stopping play for a bit of mutual ticking off and finally a Saints try. From Keynsham being penalised for holding on close to their line, through multiple Saints phases and only a few feet away, to Shepherd jinking over to score and convert. Half time 14-5.

The half time chat by Coach Kyle Marriott must have had ‘increase intensity’ somewhere in it as that’s what the Saints did from the get-go of the second half. They owned the ball early and whipped it out wide right to Nottle. He crabs forwards at pace before feeding Boyer who was short of width. Boyer now delivers a sublime grubber kick through from the Keysham 22 and chases. It looks to be covered by Keysham but at the last second their player tumbles and Boyers pounces on the ball, getting the lightest of downwards pressure to it, scoring a try the crowd loved if the volume increase was anything to judge it by. Shepherd adds a very tough 2 (7m in from touch) to make the score 21-5 after 43’.

Saints regain possession just inside the Keynsham half and pound the line of defence, with some very creative passing as both forwards and backs get involved in finding a gap. Again, the ball goes wide to Boyer with Nottle outside him and open. Boyer’s instinct is to back himself and makes for the line and the corner flag. He was denied in the last few inches of his push by a last-ditch tackle that bundled him out of play. The lineout ball comes back Saint’s way after Keynsham attempt to battle off their own line and ‘hold on’. Marriott taps it quickly and after drawing in the single defender who was watching, he pops to Kellow who goes over unopposed. Shepherd adds the 2. 28-5 after 49’.

Prop Charlie Nicholson took a break and Brandon Haque came on. Saints, notably via Ewudzi who would ultimately be named man of the match by the spectators, started to run at the Keynsham back line, making ground each time, but then would be penalised for those yard-makers being isolated and holding on. As play flowed and ebbed between the two 22 yard lines Noott, after a great shift, was replaced by Nicholson and Danny Tyrrell gave Max Bullen a break. Into the 60th minute and injuries alongside cramp on this still very warm day stating to slow the game a little.

Joe Maunder now makes his Tregorrick debut (64’) as Rory Jago gets a rest. Despite constant Saint’s pressure Keynsham are not done. They gain possession and spin to the right, where from 5m out, Ollie Gaston sidesteps and scores. They miss the conversion. 28-10 after 73’.

Marriott gets spelled by Jago. A Saint’s line-out, which has worked much better this week, was won and spread out to Plummer who went on a crashing run halfway into their 22 before popping to the supporting Tyrrell, who does not miss from such positions, diving over under the posts. Shepherd adds 2 more. 35-10 after 75’

Into the final few minutes and the crowd bay for more. Lock Adam Kellow goes on a run from the Saints 10m to the Keynsham 5m line, assisted by Shepherd and Nottle. The ball is knocked on in defence by Keynsham and from that Saints scrum, it leads to phases and Flanker Cam Taylor goes over, assisted by his pack. Shepherd adds the last 2 points of the game and that was the final whistle. Saints 42 – Keynsham 10.

A much-improved performance and a great spectacle and advert for grass roots rugby. Keynsham should be lauded for never giving up, for pushing throughout the game and, post-match, their drive to highlight men’s health via their daring ‘Odd Balls’ attire.

Next week we get on a coach to Lydney RFC, in the Forest of Dean. They played Sidmouth on the same day and recorded something you don’t see very often…a 0-0 draw!

We held the first membership bottle draw at half time. This is where all VP and Cardinals are entered into a very low odds draw to win a bottle of spirits. This week VP member Gary ‘I never win anything’ Phillips name came out the bag. If you fancy some of that and much more scroll down and find out how to join.

Pre-Match Lunches – The process of booking a pre-match lunch, due to volunteer resource adjustments, had to change. We fretted over the new process for some time as we were concerned people wouldn’t like it. We were wrong and a lesson has been learned. After putting out the first 4 pre-match lunches for sale, the pace of bookings has been phenomenal. There are only, as I type this, 11 seats left out of 328. There are 4 for the 25th September ‘Roast’ Lunch and 7 for the 27th November ‘Taste of the South’ lunch. Whilst we will be releasing the next batch of lunches for the post-Xmas period in mid-October, please do grab these few remaining seats left. More details on how to book and the menu’s are HERE.

New Wine List - We’ve sourced some fantastic wines for you to enjoy with lunch or at any time and at prices that won’t be beaten. Wine lists around the building.

Senior Players Award Scheme (SPAS) – Some have already received their cap and/or tie to recognise their senior playing efforts. If you are an ex-senior St Austell RFC players and don’t know what we are talking about, please click HERE and have a read.

We will be holding the next awards ceremony on Saturday 25th September at 5pm, straight after the Saints v Newent game. The article listing all those who have awards to pick up is HERE. If you are on the list but can’t make it, please let me or any of the Exec, or Miles/Kyle know. We will be having another one a bit later in the season.

Non-playing membership – Become a VP, Cardinal or ‘Supporter’ member and enjoy a raft of newly defined benefits, such as, for VP and Cardinal, your first couple of pints on us, entry into a free prize draw for a bottle of spirits at each Saints home game, function room discounts, discounted bar events, access to international tickets and more. Something exclusive to the VP package is a superb new ‘VP’ tie, in the new senior players award scheme colours. It really is worth becoming a member this season! Have a read for yourself by clicking HERE

The ‘Buy a Brick’ 2021/22 Campaign - An exciting new opportunity to become, literally, part of the club for the 2021-2022 season. The new Saints supporters board is now in place on the walls that wrap pour main staircase, for everyone who enters the club to see, smile at and admire the humour and outright affection at this fantastic club! It’s just £25 for a single brick (if you join as a VP member then you get a brick as part of the fee), or £100 for a 4xbrick for businesses to use to show their support whilst highlighting their brand and presence. Bags of room for humour in this, with up to 4 lines per brick to get that message out there. More details HERE .

Walking Rugby - Everyone is welcome to come throw the egg-shaped ball around at a walking pace. Very simple rules with lots of laughs so it suits the complete and utter novice as much as the seasoned player. Fridays they meet at 6.20pm by the stand to get sorted to start at 6.30pm. Just wear something you can move easily around in and some trainers. More Details HERE

The 100 Club is an amazing and simple way to support the club. For just £5 a month you get to enter and win one of 3 cash prizes. It’s easy to enter so to find out more please click HERE