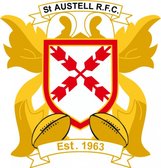 Tight game for a narrow loss

Tough game in the rain

Two very competitive squads lined up for today's fixture against Newquay. With the number of lads available to both teams it was agreed to play 2 x 20 minute games to give as much rugby to the lads as possible. It was agreed between the coaches of all the clubs at a meeting a month ago to try and let the game flow, not penalising every mistake and let the teams play, this has worked very well so far as the players get used to the new rules especially around the ruck and maul situation. With a flash of lightning and a clap of thunder the first game got underway.
Newquay took the game to the Saints and scored twice before the Saints responded on the score sheet with Aiden crossing for his first try in red and white. Newquay crossed again before Jacko pulled one back. Towards the end of the first game sustained pressure from Newquay saw a fourth try, Saints came back to narrow the gap to one score with the final act of the first game, Jake going over in the right hand corner. It was a hard fast paced uncompromising game. final score Saints 15- Newquay 20.
For the second game we expected more of the same and were not disappointed, hard tackles, fierce rucking and determination from both teams to get their hands on the ball led to an end to end game in worsening conditions. Alex broke the deadlock after finding some space wide out and racing in to score despite the attentions of the retreating defence. Newquay came back again and crossed the line 3 more times before the end. Once again there was some fantastic try saving tackles from both sides today to keep the scores tight. Final score Saints 5 - Newquay 15.

It is hard to be too disappointed with the result as the lads new and old played really well today continuing to build on the work in training before the games. The rucking continues to improve and the lads are getting used to the finer points and laws of the breakdown. Several standout performances today, Jacko in the first game was great and Oscar in the second game was inspiring. Men of the match to those two. Well done everybody you gave it your all and can hold your heads high.