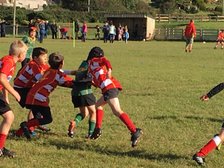 Strong competition away from home

A hard Sunday morning this week for the under 10's against Perranporth. A lot of contesting for the ball on the ground and plenty of ripping by both sides. Good numbers for both teams meant plenty of rolling substitutions with everyone getting plenty of game time. St Austell had some really good runs against a really hard team. The week on week improvements are noticeable!

Congratulations to Henry chosen by the coaches as player of the match for his improvements in tackling and his running forward.