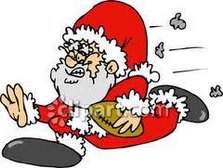 Getting Better Every Week!

U10's hold their own against a Spirited LIskeard

It's fair to say that the U10's have experienced a roller-coaster of a season up until this Seasonal break. The transition from U9's and a new coaching team has taken a while to bed in. The coaches have been hammering two areas for the past 6 weeks - passing and tackling. Today was a day of seeing that hard work pay off in terms of strong lines of defence and the ball being moved wide to allow at times a flurry of tries to be scored.

Today was also the first time the coaches have seen the players playing for each other. The message has been consistently around teamwork and not individual brilliance (although that is also welcome at times). The team were set objectives on the pitch and some players had individual targets that would compliment areas we'd like to see them improve in.

From the whistle the Saints tackling was much improved and many showed honest and controlled aggression in rucking and mauling with some good steals. The rucking over is coming on as is the clearing out of the ball from the back but still room for improvement. The players are now effectively realising that they can't simply run straight through sides anymore so they must look for support which is great.

A number of good tries born from teamwork and support were scored. The man of the match went to Owain who met his personal target for tackling and actually exceeded it! Tyler was a really close second on the day for his fantastic ball carrying and territorial gains. A number of others could all have won I think but we felt Owain had turned a corner today.

Mention should go to Liskeard players and coaches. Well done to you all for a really good game today played in the best of spirits!

From Myself, Paul, RIcky, SImon and Chris we want to wish all the players, parents and guardians who support the U10's week in week out in all weathers a very Merry Christmas and a happy New Year!