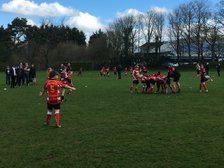 Fantastic effort from all

A great day in Liskeard

What a result - after a shaky first half the under 10s turned it around and started to make some really good progress. The rucking tempo was upped and the tackling improved. Emily started running in tries for fun and turnovers from rucks were abundant. In the second match Liskeard made it more of an even contest however St Austell still kept the upper hand. In the end it was an amazing turnaround for the team - an effort they should rightly be proud of.

Here's looking forward to the last few matches of the season.