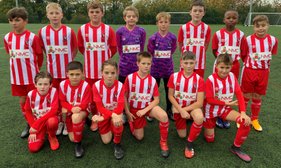 It was nice to get a second game in quick succession following lock-down, and finally today we managed to play our first home game (even though the previous matches against Woking and Newbury were supposed to be home fixtures!). Today’s visitors, from Wiltshire, would be Swindon District and after previous victories against both Woking and Newbury we were hoping to make it three out of three as the Stevenage side looked to stretch their unbeaten run and make progress up the table.

Swindon arrived in good form themselves, also looking for a hat-trick of wins after previous victories over Newport (4-0) and Gloucester B (6-5), so we knew that we had to treat them with respect this morning.

We had to make some changes to the squad again, some enforced, as Orryn came in for John between the posts and our back three consisted of Preston, Louis and Freddie. With Conor still unavailable we placed Tom and Muno together in midfield and asked William and skipper George to supply the width. Blake would start up front leaving Alfie, Elvis and Zachary as our three substitutes and they would be brought into the game in the first half.

Once again, we urged the boys to be positive and energetic from the start, to try and get our good footballers involved as often as possible and to be creative down each wing and get those crosses into the danger areas. We are blessed with some good finishers this season and it was important that they received good service to be effective.

I felt that we played some really good football in the first half, lots of one-touch and two-touch play, but the only thing missing was the end product. We tended to want an extra touch when a shot was on, or we passed instead of taking a shot, and in fact the clearest two chances fell to the visitors with Orryn making one excellent save and another effort cleared off the line as they pressed for the opening goal of the game.
With our three substitutes now on, Alfie soon became a threat and indeed when George played him in for a 1-v-1 with the central defender I knew that Alfie would get the better of him and get his shot away – which he did and although the keeper got his hands to the shot it was too strong and ended in the net for 1-0 which is how it stayed at the break.

The attacking intentions from both sides was clearly obvious in a second half full of efforts. Stevenage went 2-0 up through Alfie but then we failed to deal with a ball over the top that allowed Swindon a quick response. We then worked hard to regain the two goal advantage with Zach scoring with a good effort from distance. But Swindon hadn’t given up yet and grabbed a second from the spot after we were too eager to win the ball back in our area, and then we dithered on the ball and allowed them a quick break to make it 3-3.

But what I like about the Stevenage side this year is that they don’t panic when things go wrong, they just keep playing the same way and attacking relentlessly. In a flurry of goals near the end Alfie completed his hat-trick with another great strike, William scored from a lovely curved effort from the edge of the box and Blake did ever so well to score from close range with little angle available. Although the score line probably flattered us at that stage, I do think we had done enough to deserve all three points today – though Swindon may justifiably argue that they also had plenty of chances.

So, a good team overall performance, the back three never panicked in possession and were always looking to play out and through the midfield. Some of the passing from Muno and Tom in the centre of midfield was brilliant, as we sought to play diagonal through balls to the wide players and some of the finishing today was of the highest quality. So that is it, in terms of league fixtures, for 2020 with just one cup game to play against St Albans next week. I really couldn’t have wished for more at this stage, all of the boys have justified their place in the squad this season and we have already seen great development over the past few (disrupted) months. The main objective was to try and get them playing some quick football, building from the back, not being afraid to make themselves available and making the right decisions in the right areas. We have progressed to one cup final tournament, we top the Southern Counties League after three fixtures and so far we remain undefeated in all competitions – which has far exceeded any expectations that I had back in August when we began our trials. Onwards and upwards!