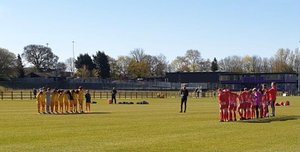 This morning we took on near-neighbours St Albans ‘Yellows’ in the second of the rearranged games in the Southern Counties League ‘Eastern’ Division. We have previously met twice this season, securing a narrow 2-1 victory in a friendly last October followed by a 1-0 victory in the League Cup tournament a few weeks later – both games were very close, and we expected another tight affair today. We were back at The Valley Academy for the final time as well, as our regular home pitch is unavailable after today as they host a series of international festivals over the coming weeks.

After last weeks tight, but exciting, encounter with Luton & South Beds we shuffled the side around with skipper George unavailable we brought in Orryn, Freddie and Louis as we looked to try and secure our first victory in the revamped, regionalised, league. The boys are bubbling right now, all of them are keen to play, and some of the work in training has been terrific the past few weeks as we attempt to get them playing quicker and with more purpose. I could tell from our warm-up that we were on the money today, it was fast-paced and the boys were enthusiastic and raring to go.

We started with Orryn in goal and a back three of Preston, Muno and Freddie. Conor and William would provide the width with Alfie and Elvis asked to play in the centre leaving Blake in attack. This meant three subs today in Tom, Louis and John which presented a variety of options to change things around.

I have to say that we were on fire from the first minute, from an early corner Alfie had the first chance in the opening minute but missed the target and from a dangerous corner delivered by Conor (one of many!) Elvis saw his effort saved. We looked dangerous every time we attacked and with just five minutes on the clock Blake did well inside the area but saw his shot rebound from the post but it fell to Alfie who finally struck home for 1-0.

Will Nemes, who I thought was terrific today, was already causing problems down our left and he broke away to finish with his left foot to double the advantage after 15 minutes. Muno went close with a header in front of goal from another Conor corner before Will did ever so well to control the ball and his effort took a deflection off of a Saints defender to wrong-foot the keeper for 3-0. And it was Will again, on 25 minutes, that had two chances to deliver a cross from our left and on the second occasion Muno finally got his header on target for 4-0.

Although the half-time score was comfortable, there was still a lot of good work being done in the Stevenage defence by Preston, Louis and Freddie to keep St Albans at bay, and Orryn did well with anything that came into his area - though St Albans did have a couple of good opportunities from corners that should have seen them score.

We expected the visitors to come out blazing at the start of the second half and to be fair they really gave it a good go in the second half in a much-improved performance. But again, our defence was holding firm with Louis winning every high ball and Preston and Freddie battling hard alongside. St Albans managed to get a goal back, which briefly stirred them but the game was over with 13 minutes remaining when Will delivered another good ball into the area from the left, the St Albans keeper made another good save before the ball fell to Tom Palmer who struck home to complete the scoring.

It was nice to get maximum points today, it sets the league up nicely with some tough games still to come as we go into a five-week period of cup football before returning to league action against Sutton at the end of May. What I liked about today was that this was a very good team performance, every single player performed at the best of their ability, we will need the same next week against a very good Chelmsford side in the national 9-a-side.