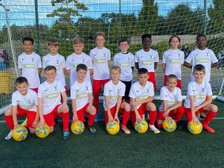 Stevenage beaten by better side

Following the tournament last weekend, it was back to league action today with Stevenage hosting Sutton Schools at Martins Wood School, a new home venue for us. Sutton arrived in good form, having won four and drawing one in the St Albans League Cup tournament last week, and that included a 2-0 victory over Stevenage in which they were very impressive, so we knew we had our work cut out today.

We shuffled our squad again, John, Tommy and Elvis came into the squad, and we tinkered a little with our positions – we are still learning a lot about our squad at this stage. So, we lined up with John in goal and a back three of Emmanuel, Tommy and Thomas which allowed us to push George further forward alongside the returning Elvis in midfield. Zach and Lennon would play in the wide positions and Orest up front leaving Coby and Ollie as our two subs.

I am still trying to get the boys to play at a high intensity, moving the ball around quickly and with good pace on the ball with minimal touches if possible. They are doing some great work in training every week and I just hope that some of it eventually transfers to our performances on a Saturday.

We could have had the perfect start when Lennon got the better of the right defender and crossed for Orest who’s touch sent the ball just past the far post. We were working hard in the opening exchanges, I thought George and Elvis were strong in the centre and Zach and Lennon definitely had the pace to worry their respective defenders. John had rarely been troubled in the first half even though Sutton did look dangerous when they got forward and probably had the better chances.

Coby and Ollie were brought on in the first half, and Ollie particularly impressed with his hard work and tackling. We had to shuffle the team slightly when Emmanuel took a knock to the face just before the break.

In the second half Sutton were the stronger side and although they may have deserved to take the lead, the manner of the goal was disappointing as we let somebody have a free header in front of goal from a corner that gave John no chance. John had made one good save before that to keep the scores level.

Then a mix-up in defence allowed their striker to round John and score into an empty net for 2-0 which knocked the stuffing out of the Stevenage side. To be honest, we probably played our best football in the closing stages as we began to find our passes and build up patterns of play, and we had a couple of half chances that never really troubled the Sutton keeper.

We played a team with several academy boys today (that are at Palace and Charlton) but for long periods of the game we worked hard and restricted their chances. We have some things to work on, but they boys shouldn’t be too disappointed as they were up against a good side today.