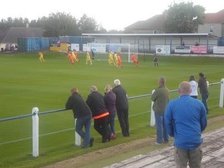 The Game Is About Glory....

Stewarton United travel to Abbey Park to take on local side and fellow Premier League outfit Dirrans with the winner going through to the final.

Stewarton United can top off their season in style when they face Dirrans Athletic tonight in Kilwinning's Abbey Park Stadium. A fighting end to the Premier League campaign could be surpassed this evening if United could continue their staunch and stylish cup form in tonight's semi final. Sweeping all aside en route to the showpiece semi final United have nothing to fear as their Cup heroics will testify.
Fellow Premier League side Dirrans will have the majority of the crowd tonight being in the same town, however both teams have had decent Cup runs this term. If Stewarton can come up with the display they are capable of in a one off game, it could be their name going forward to the final and a shot at silverware glory!
Share via
FacebookTwitter
https://www.pitchero.com/clubs
Recent news