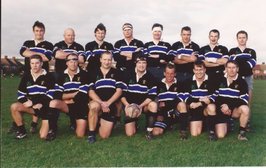 St Francis RFC was founded in 1960 by St. Wilfrid's School old boys who attended a youth club attached to the Friary Church of St. Francis and St. Anthony, hence the name St. Francis Rugby Football Club. In its infancy the first president was the parish priest Father Malachy. The central administrator was the late Jack O'Neil who was secretary, chairman and treasurer, later he became the second president of the club and was patron until his death.

The club has had a nomadic existence, playing in Northgate, Ifield, Langley Green, Bewbush and Broadfield before moving to its present ground at Southgate playing field. The club's first clubhouse was the Jet Line Club. It later moved to Goffs Park Pavilion where it resided for 25 years. At the beginning of the 1998/1999 season, the club joined forces with the Crawley Irish Centre to form the Emerald Sports & Social Club at Southgate Pavilion.

In October 2010 it was organised so that Crawley and East Grinstead Ladies rugby teams would join Saint Francis RFC to create our first Ladies team. Ever since then Ladies have been welcomed to our club where we have attracted some very talented and skilled players. The Ladies team even boasts players who have represented international teams such as Wales, as well as rugby union teams including Saracens Woman’s.