Bernhard Carl Trautmann was born in Walle, near Bremen, Germany on 22nd October 1923 and upon leaving school, he became an apprentice motor mechanic.

He joined the Luftwaffe in 1941 as a radio operator, eventually becoming a paratrooper, winning 5 medals, including an Iron Cross (First Class) on the Eastern Front, but having transferred to the Western Front, was captured by the British in 1944, seeing out the remainder of the War in prison camps in Northwich and Ashton-in-Makerfield. Whilst at Ashton, he played in football matches, initially as an outfield player, but following an injury, went in goal, where his all-round athletic abilities allowed his career to blossom.

In 1948, having declined an offer of repatriation, he began playing for St. Helens Town and quickly earned a reputation as a goalkeeper of rare talent, attracting interest from several Football League clubs. His brief career with Town began with a home game against South Liverpool in the Liverpool County Combination on 28th August 1948. On his third appearance, it was reported that very sportingly the Skelmersdale supporters gave Trautmann a wonderful reception.

Later in the year, the club secretary, John Friar, proclaimed in his programme notes To put your minds at rest again, I am pleased to inform you that B. Trautmann is Not leaving Sutton. As I have told you before, his whole interests are in the Town Club and he is more than happy with us. But he has been granted leave to visit his parents. He will be going early in the New Year and we shall lose his services for a matter of three matches.

Such was the towns affection for Bert that they sent him on his way with a large food hamper and a considerable sum of cash, which was an overwhelming gesture of kindness not lost on Bert and, indeed, his family at such a difficult time in Germany's history.

On Berts return, he assisted Town to success in the George Mahon Cup competition, his and the clubs first trophy. Runcorn were beaten in the final at Prescot before a crowd of 9000. 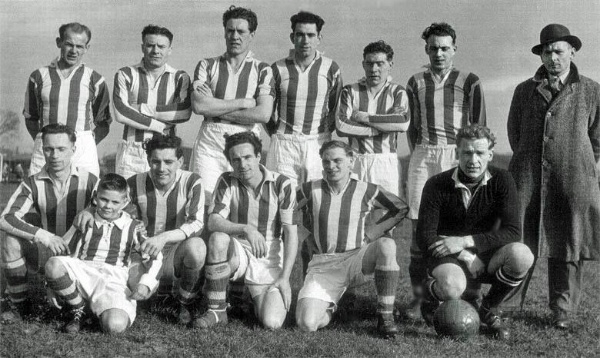 As the 1949/50 season opened, with Town in the Lancashire Combination, Second Division, the pressures on St. Helens to part with their star player became ever stronger and a transfer to Manchester City was agreed, but deferred until Towns elimination from the FA Cup. That occurred on 1st October 1949 when Town lost 0-3 to Bangor City and the transfer was completed the following Thursday. Bert had played 43 games for St. Helens Town, but he returned on three subsequent occasions, twice for friendly matches with Manchester City and once to marry the secretary's daughter!

Bert's debut for City came in a game with Bolton Wanderers on 15th October. There were mass protests over his signing by the citizens of Manchester, who had suffered so much at the hands of the Germans in the War. However, the affable keeper did not take long to win over the hearts of the City fans and any hostility soon melted away. He went on to make 508 League appearances for the Maine Road club in a 15-year career, culminating in a testimonial game which attracted a crowd of over 47,000.

The game for which Bert is best remembered is the 1956 FA Cup Final against Birmingham City. The Sky Blues won 3-1, but Bert broke his neck when caught by a stray boot and bravely played on for the remaining fifteen minutes. The extent of his injury was only confirmed some days later. Honours continued to flow for Bert, selected twice for The Football League and he was the worthy recipient of the FAs Footballer of the Year Trophy in 1956.

After retirement as a player, Bert became manager of Stockport County, subsequently managing two teams in his native Germany and completing his career in charge of Burma, Liberia and Pakistan. He was awarded an honorary OBE in 2004 for his services to Anglo-German relations through football his Trautmann Foundation is a charitable trust set up to raise funds to foster that aim and the following year, he was inducted into the National Football Museums Hall of Fame. Bert lived in Spain for many years, but still visited England occasionally.

Bert visited Manchester in 2009 and during his short stay he made time to meet with St Helens Town officials. Bert was kind enough to donate a number of items which the club has auctioned, raising in excess of £1000.

The relationship between Bert and St Helens Town was cemented and Bert was delighted, in September 2009, to accept the clubs offer of becoming its Honorary President alongside former Town and Manchester United great Bill Foulkes.

Sadly Bert passed away on Friday 19th July 2013 at his home in Spain.