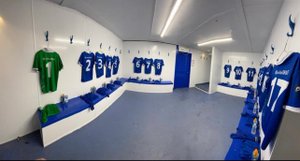 This coming Bank Holiday Monday afternoon (31st May) our Under 18s are set to face Irlam FC in the North West Youth Alliance Presidents Cup Final at NWCFL Burscough FC’s new facility with a 2:30pm kick off.

After the league season was curtailed eight sides competed in a group stage of the league cup with each team playing each other once and the top two sides competing in the final.

Monday’s opponents Irlam finished top winning seven games out of seven with Town finishing in second place with six wins and their one defeat a narrow 1-0 loss at Irlam.

Both sides have only lost 2 competitive games in the 20/21 season with Irlam losing Vs Notts County in the FA youth cup and Town in the original division 1 league in December. Towns two defeats coming against Chester FC in the FA Youth Cup and the previously mentioned loss to Irlam in the April.

Manager David Jones commented ‘The players have worked so hard since July even with all the restrictions and the stop start football, I’m made up for them that they have something to look forward too after such a disruptive two seasons of football at such an important age for development.

Irlam are a fantastic side and consistently produce talented youth teams so we look forward to a good game on Monday.

With spectators now being allowed back in grounds we can confirm details for the game below.

Please observe social distancing at all times, and do not arrive any earlier than 1 hour before kick-off. Please use the Leisure Centre and Tesco for parking which are less than 5 minutes’ walk from the ground