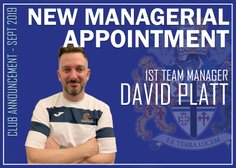 St Helens Town AFC are delighted to announce that David Platt has agreed to take over as First Team Manager with immediate effect following the resignation of Lee Jenkinson over the weekend.

David has been involved with the club since 2014 when he joined as Veterans Team Manager and built the squad from scratch. He then moved on to take up the reigns of the Open Age Sunday team before taking over the Reserve Team in the Cheshire League at the start of last season.

Town's new Gaffa holds an FA Level 2 coaching qualification and has extensive experience of coaching across various levels and age groups and has been instrumental in the establishment of the clubs Junior Section over recent seasons.

When we spoke to David this morning he stated "I am extremely grateful and proud to have been appointed First Team Manager at St Helens Town. It is a club with a massive amount of history you only have to look at the heritage boards at the ground to appreciate that."

"We have a talented group of players at the club and my first job will be to explain my ethos to them and explain the way I intend to take the club forward. The club has a lot of good people working behind the scenes and I'm looking forward to getting started working with them and all the players to put the smiles back on their faces on a Saturday afternoon."