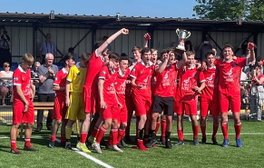 U18's Sign Off In Style With Emphatic Cup Win

U18's secure Presidents Cup glory at Burscough with a dominant performance in the sunshine.

St Helens Town took revenge for their only defeat in the Group Stage of the North West Youth Alliance, Presidents Cup with an emphatic win against Irlam at Burscough in difficult conditions for both sets of players with the intense Bank Holiday sunshine beating down on the pitch.

Town started the brighter of the two teams taking the game to their opponents, a period which saw them be denied the opening goal but the woodwork 3 times in the opening 25 minutes. Soon afterwards a smart combination between Jordan Dainty and Deacon Charnock forced a good save from Cooper in the Irlam goal before Joel Williams was quickest to meet a bouncing ball and was fouled in the process winning a penalty. Williams picked himself up, dusted himself down and made no mistake from the spot slotting a cool penalty home to put Town 1-0 up.

The leaders continued to dominate possession and it was no surprise when the lead was doubled. Matty McDonald charged through the middle sliding in Dan Lenehan who struck a dangerous shot across the keeper which appeared to be finding the bottom right hand corner of the net and in the process of trying to divert the ball away from goal the Irlam defender only managed to turn the ball home.

The next goal was always going to be important and around the hour mark Town found their third and put the game as a contest to bed. A loose ball found its way to Dainty with work to do but he managed to quickly get the ball out his feet and put it past the outstretched hand of Cooper in the Irlam goal to record Town's third goal of the game.

Town remained disciplined limiting Irlam to very few chances. However in the 95th minute Houghton brought down an Irlam forward in the box and the penalty converted with virtually the last kick of the contest.

Moments later the final whistled sounded and the celebrations started of a team that deserved their moment in the sunshine having been denied a chance at silverware last season when they reached the Liverpool County FA Youth Cup only for the competition to be scrapped.

Speaking to a clearly delighted manager David Jones after the game he said:

"I’m over the moon for all the players, I thought they were faultless all afternoon and limited a good Irlam side to very few chances. They did everything we asked of them and were unlucky not to get a few more goals in the first half.

The players have all worked so hard since ‘lockdown 3’ to get to the final and they certainly delivered on the day. It was a fantastic day for everyone involved with the club after such a disruptive 2 seasons of football it’s great to sign off on a positive note."

Highlights of the game are available on the website by clicking the link below: