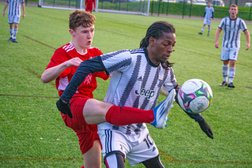 Points shared away to East Villa

St Helens Town were looking to build on last week’s impressive win over Sefton Athletic, by putting in a strong performance against an East Villa side who ran out 3-0 winners at Ruskin early in the season.
Expectations among the Town faithful weren’t high when the team-sheet revealed six enforced changes from last week’s side.
It looked by being yet another case of one step forward, two steps back; when Town immediately went 1-0 down after a lack of concentration played the East Villa striker onside, and able to slot the ball home.
The Town side could have easily crumbled, but the confidence and fight that the team showed last week seems to be running through the whole squad, and the team soon found their way into the game.
Striker Ryan Cook worked tirelessly, and the returning young forward Oghenetega Okeregha caused the East Villa defence all sorts of problems, but the side failed to create any real efforts on goal.
Town probably edged the first half on performance, but could easily have gone in to the break 2-0 down if keeper Ruairi McDaid hadn’t pulled off a magnificent save from a close range effort to send the ball sailing over the bar.
The second half continued in much the same vein, with Town on top, without carving out any real chances on goal. Meanwhile, at the other end, a couple of crucial interjections, and an overall impressive performance from center back Kenny Dixon kept the score at 1-0.
As the game went on, Town started to look more dangerous on the attack and began to carve out some real chances. Striker Ryan Cook was unfortunate not to earn his side a penalty as he was denied a goal scoring opportunity by a defender who seemed intent on swapping shirts mid-game.
In the 76th minute, the ball bounced awkwardly in front of midfielder Chris Greene, who took it at waist-height and hit a screamer past the futile dive of the East Villa keeper. After the equaliser, Town were pushing for the winner, and it almost came when defender Tom White saw his header from a corner go inches over the bar.
The closing moments saw the East Villa side reduced to ten-men, but it was too late for Town to capitalise on the advantage.
Despite the late rally, Town will definitely count this as a point gained and not two lost. The point moves them off the bottom of the table and level on points with the team above them. If the side can keep their performances at the level of the last two games, their season (which has been such a struggle) could quickly turn round.
Share via
FacebookTwitter
https://www.pitchero.com/clubs
Recent news