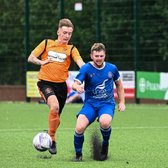 Town got the 2021/22 season off the a losing start on Saturday as they fell to defeat against an Atherton LR side who were more clinical than their hosts and took their chances well before exploiting their opportunities to counter attack as their hosts looked to get back in the game.

The 101 in attendance didn’t have to wait long for the first goal of the game and it was the visitors who opened their account. The pre-match report had indicated the danger of the visitors front three and the lively Connor Comber was allowed far too much time and space around the hosts box where he was able to fire home from 25 yards.

Liam Diggle had a good chance to level matters midway through the half but he couldn’t guide his effort past Jack Buckley in the visitors goal and it was his opposite number Comber was proving to be a handful for the Town defence. Just after being denied by a fine piece of defending from Town skipper Colyfa Kamara, Comer created another chance through which he doubled the lead on 26 minutes. Again some cautious defending allowed him to get into a dangerous area and with a neat turn and shot from closer range time he made it 2-0 to the visitors.

The hosts got caught with a classic counter attack on 33 minutes when pushing in an attempt to reduce the arrears and Luke Nicholls was on hand to extend LR’s lead. Town showed character and got themselves on the score sheet just before the interval. Good work centrally by Sam Hughes saw him drive forward before finding Josh Clegg on the right flank, he got to the by-line before cutting back towards Joel Douglas and he was able to steer the ball into the net from close-range.

A period of Town dominance at the start of the second half saw a good penalty claim ignored after Ste Brown was felled in the box and Diggle met a right wing cross from Clegg on the far post but could not steer his header on target. LR always looked dangerous on the break and the visitors were able to restore their 3 goal cushion after 63 minute as Luke Nicholls beat the Town offside trap rounded Nathan Wolland in the Town goal and slotted home.

Keiron Dale nearly added a 5th for the visitors but he was denied by a good save low down to his left by home stopper Wolland. Liam Diggle rose highest on the far post to head home a Paul Cliff corner from the right on 83 minutes to restore slim hopes of a come back but again with Town pressing the visitors picked their moment well and added a fifth and Nicholls hat-trick goal to extinguish any chance of a come back from the hosts.

Matters went from back to worse as Paul Cliff was sent off in the aftermath of the goal and Town had to play out the remainder of the game with a numerical deficit.