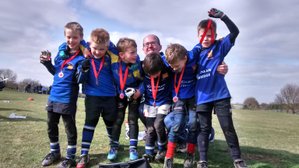 U7s battle through to take the Shield!

Unstoppable spirit from the U7s squad

The U7s took a small squad for the club's first visit to the Wendens Festival, eager to build on a great performance at the County Cup the previous weekend where they were narrowly beaten in the semi-final by the eventual winners of the cup.

With some time to wait before their first match the boys got stuck into some light training, mixed with the usual running around and forming piles of bodies on top of a ball.

However the game faces appeared as they lined up to face Shelford, and the tactics of straight running, close support, and relentless tagging soon saw the boys racking up a comprehensive win.

The next game against Hertford saw a similar performance, but at the finish there was confusion among the Bulls players and parents (and coach) as the pitch marshal had scored the match as a win to Hertford.

This only seemed to fire up the players, and the remaining pool games against Huntingdon and Royston were a blur of mazy running and faultless passing in attack, alongside yet more phenomenal tagging - we think some plays included at least 15 tags but regularly lost count! Every ball spilled by the opposition was picked up at lightning speed by a Bulls player and planted over the try line.

This put the boys into second place in the pool, which meant a semi-final in the shield competition. The opponents were another squad from Hertford, who appeared a much larger team of lads. This was a much more even contest, and a couple of unlucky breaks in the first half might have caused St Ives heads to drop, but the last minute of the half saw the boys putting in a great defensive effort to force the turnovers they needed to take the lead at half time. A ping-pong second half saw Hertford edge it by one try, but it wasn't enough and St Ives took the game 9-8.

One game remaining, and it would be against a team from Bishops Stortford who had shown in their semi-final that they took a very physical approach to tag rugby. However St Ives knew what they were up against and didn't let it put them off their game one bit. The boys stuck to the gameplan of straight running (although there were plenty of side-steps and cutting inside) in attack, and defensive tagging that kept the opposition on the back foot and the referee watching carefully for any slip-ups in the boys' efforts to stay onside.

Again St Ives went behind during the first half, but squared it at 3-3 by half time. The second half was a different story, with another turnover giving the advantage and St Ives making sure of the win with the final try of the match to take it 7-5.

The scenes of celebration were a joy to watch, and Edward, Felix, George, Charlie, William and Bailey fully deserved their medals and trophy as every one of them had put in a fantastic performance. William just edged it for the Player of the Day award, but the consistently positive attitude, never-say-die spirit, and the support for their team-mates on and off the pitch that the boys showed throughout a long day meant some tired players and proud parents by the end.