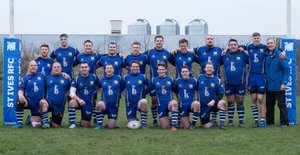 Ives welcomed Old Scouts to the Chicken Shack for another rearranged encounter, keen to get back to winning ways. A blistering start saw them drive deep into opposition territory. Only a high tackle slowed them down, Paul Ashbridge stepping up to convert the resultant penalty.
Old Scouts responded immediately with a score of their own. A midfield break and good support saw them over in the corner to take the lead with an unconverted try.
Immediately from the kick off, Ives pressured the visitors hard. Skipper Bartlett led the way with a succession of crunching tackles on the Scouts’ stand-off. John Paxton forced the ball loose and Ashbridge was on hand to scoop it up and canter through the defence to score by the posts. His conversion took the lead to five points.
In an incident packed opening, the referee had a tough decision as Ollie Raine was taken out in the air, landing awkwardly. Without the benefit of a TMO, and seeing that Raine had recovered, he decided that the landing was worthy of a yellow card only.
Exploiting the space, Ives worked the ball wide to gain territory, with Raine carrying prominently.
With the sinbin period about to expire, Ives scored the try of the match. Good support play saw Ives into the opposition 22. Then good hands, especially by Alex Henly and Ben Fleming, saw Warwick Brittany into the corner with a great finish.
Scouts were keen to make their own impression and at times only scrambling Ives defence prevented them from getting into the red zone.
With the half drawing to a close, Ives once more had the upper hand. Again, a high shot in midfield was all that prevented continuity. Ashbridge added the penalty and the half closed 18-5.
Turning to play up the slope and against the breeze, the Bulls started the second half well. Happy to keep the ball in hand, they maintained possession for many minutes, but could not gain enough territory. A pre-planned move broke down and Old Scouts demonstrated their own threat. Collecting the loose ball, they played with skill and patience, finally scoring a try when the Ives defence had been stretched to breaking. The conversion brought the game back to a six-point gap.
A penalty opportunity for the Ives fell just short, but they continued to apply pressure for a long period. Pounding away at the defence, Old Scouts kept them at bay until the game entered its last quarter.
With a penalty on offer, John Paxton spurned the potential advantage and took matters into his own hands. A step, shimmy and sprint from outside the 22 saw him dive over in the corner for a fine individual try.
Ives’ ability to keep possession was denying Old Scouts opportunities until a sole Bull was penalised for holding on. Realising the difficulty they had faced against an inspired Ives lineout, Old Scouts chose to tap quickly. The ubiquitous Raine was on hand to thump the runner to ground and Duncan Williams demonstrated his jackling prowess to win a relieving penalty.
Determined to get something from the game, Old Scouts threw all they had at the Bulls. With limbs beginning to tire, a couple of loose tackles allowed the visitors to gain ground and finally score again in the corner.
Ives reset their defensive mindset and improved their line speed for the remainder of the game. A couple of chances to Scouts were snuffed out when the defence caused ball spillage.
As the final whistle went, the home support cheered loud, knowing they had witnessed a fine performance and a deserved victory.
Share via
FacebookTwitter
https://www.pitchero.com/clubs
Recent news