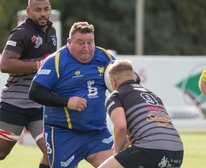 Hosts revel in warm conditions on their new 4G pitch

After a tremendous pre-season, Ives were put to the sword in their first league outing of the season. Forest have invested in a 4G pitch and the new facilities have clearly attracted many new players to their club in recent months.
Nobody expected an easy encounter as the hosts were promoted as league winners and were very confident as a result. However, nobody on either side would have countenanced Forest being 14-0 up after only 8 minutes.
A downfield kick was fielded by the full back, who played well all match, chipped the onrushing defence, regathered the ball and put his support in to score.
As they and spectators of both sides would the entire match, Ives struggled with the breakdown and tackle interpretation and penalties against them were frequent. The second Forest try followed a series of lineouts.
Ives tightened up their play both with and without the ball and made good yards. Paul Ashbridge made a telling break which ultimately forced a penalty. From the resultant lineout, a fine driving maul saw Duncan Williams dot down. Max Dominy converted.
For 20 minutes the game was evenly contested. Both sides having chances to score.
There then came the period which determined the result of the match, if not the score. First, Ives elusive full back Warwick Brittany left the field with a nasty knock to his nose.
Ashbridge was then deemed not to have released his man in a tackle and saw yellow. Forest kicked the penalty, then from the kick off scored through the reduced defence on the stroke of half time.
Half time 22-7.
Still down to 14 men, Ives were immediately under the cosh in the second period, conceding two quick tries as Forest stretched the depleted defence.
Back to a full complement, the play evened up once again and it was Ives who were next to score. Forest now found themselves subject to the whistle, ultimately conceding to the bulldozing Chris Williams. Again, converted by Dominy.
Forest bounced back with another try of their own.
Back came the Bulls applying pressure on the hosts’ line. Matt Wood stretched to touch down on the line, Dominy converting.
With a potential losing bonus point in sight, Ives pressed again. But, losing possession on their opponents’ line, they once more found themselves behind their own posts. This was unfortunately followed by another concession immediately from the restart.
Determined to come away with something from the game, Ives camped in the opposition 22 for the remainder of the match.
Ashbridge went close, the ball being dislodged as he stretched for the touch down. Forest kept their line intact through fair means or foul, somehow maintain a full complement on the pitch.
The ultimate indignity was in the final play when, finally creating an overlap, the ball bounced and was knocked on by the Bulls with no opponents in sight.
DoR Brown was not despondent after the match. “We took a while to “get off the bus”, but once we started to play as we know we can we created many opportunities. Another day we’d have taken more of them the result would have been a lot closer.”
Ives will brush themselves down and be ready for the next encounter on 28th versus recently relegated Leighton Buzzard, which will prove a tough encounter.
Share via
FacebookTwitter
https://www.pitchero.com/clubs
Recent news