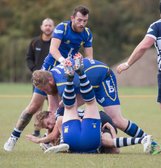 Ives found themselves on the wrong end of a very good performance by strong opponents. Leighton Buzzard may have been relegated to this division, but their speed of thought and deed was too much on the day for the Ives at the Chicken Shack.
A key factor throughout was the pace at which the Buzzards transitioned from defence to attack following a turnover. Many of their eight tries arose from Ives losing possession, either in the loose or having given up a position with a knock on.
Buzzards’ loose trio and inside backs worked well together, frequently managing to breach the gainline despite the valiant defensive efforts especially of the returning John Paxton, Duncan Williams, the indefatigable Ollie Bartlett and Matt Wood.
Despite the four tries at regular intervals against them in the first half, the Ives never looked out of the contest. More accuracy would have undoubtedly led to a couple of scores after frequent penalties conceded by the visitors. And a different arbiter would have marched directly to the posts when a superb driving maul from 20 metres out was stopped on the line illegally.
However, the half ended 0-26.
The third quarter mirrored the first with Buzzard scoring at intervals, interspersed with the Bulls challenging for points to no avail.
The fourth was all Ives as they were stung to gain some consolation. Great line breaks by Williams, Tommy Newman and Paxton almost led to scores.
Ives applied pressure on their opponents’ line forcing the scrum half to knock on. After taking a scrum from another penalty, Ives marched over for Williams to dot down, converted by Alex Henly.
In attempting gain a further score, Ives kept the ball alive only to lose possession. Buzzards went the length to score at the other end.
After two tough weeks, Brown was realistic post-match. “Once again, the scoreline belied the many good phases of play that the Bulls put together. For the second week running, two tries went begging as the ball was lost over the try line following excellent approach work. We therefore know that somebody will be on the receiving end very soon.”
Share via
FacebookTwitter
https://www.pitchero.com/clubs
Recent news