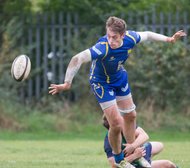 Ives slip to third defeat despite much improved performance

The losses suffered by the Bulls in their opening two matches were recognised as being well beaten by superior opposition on the day. Following this latest defeat there was a palpable sense of anger amongst the players, feeling they had let an opportunity slip by.
The squad must take heart from a much-improved performance, however. A losing bonus point escaped the Ives when final passes or 50:50 decisions were against them. Indeed, the Bulls’ second half performance had the hosts rattled to the extent that they had a man binned for backchat as the visitors piled on the pressure.
The theme of the game was set early when good defensive sets by the Bulls repelled early attacks by Buckby only for soft penalties to cede territory. Buckby took advantage by kicking to the corner and after a prolonged series of attacks finally breached the Ives line.
Ives responded with a great passage of play which, when stopped illegally, led to Paul Ashbridge slotting a penalty.
Buckby recovered the ball from the kick-off and again demonstrated great patience and ball retention. Keeping the ball alive for fully two minutes they scored in the opposite corner.
Back came the Ives applying pressure of their own. From the kick-off, Tom Watts showed his perpetual dynamism and thumped his opposite number down, forcing a knock on. Ives scrum was gaining in confidence and applied the squeeze. A forced pass went to ground and Buckby capitalised, continuity leading to a try in the corner at the other end.
With their tails up, there followed a period of ascendancy for the home side. Valiant Ives defence across the park was finally broken. Crossing the line, the home winger was prevented touching down with what was deemed to be a high tackle and a penalty try awarded.
With the half closing, Ives were again on the attack, only to lose possession and concede at their end.
Half time 29-3.
Despite being down on the scoreboard, the Ives knew that tightening up their own possession and discipline would alter the pattern of the game.
From the restart, the Bulls took the game to the opposition. The pack was bullying Buckby and the backs were beginning to breach the gain line. Pressure on the Buckby scrum forced an error. A quick tap by John Naylor ultimately led to a try for debutant Myles Costello, who had a fine game throughout. Ashbridge added the extras.
Buckby kept Ives in their own 22 following the kick-off. A pass between players saw the home winger react quickest and touch down the loose ball. Again, Ives had been the architects of the opposition scoring.
For fifteen minutes, Ives played at the Buckby end of the pitch. The home defence and Ives unfortunate loss of control of the ball on occasion prevented scores.
Ashbridge went close, only for the try to be scratched off for a deemed double movement on the floor. A break by Buckby then saw them earn what might be called a less than well-deserved 14-point swing.
The resolution of the Bulls came in the last quarter. Seemingly from nowhere, ball retention improved. Great continuity between forwards and backs rocked Buckby back on their heels until Duncan Williams deftly put Joe Cox away on the wing. Cox showed a clean pair of heels to two covering defenders and completed a fine team try. Converted.
With the game heading for its end, Ives sensed the chance for at least a try bonus point. Continuity got Ives to their opponents’ line. Costello was again the man to profit, fighting over. The conversion was dropped to ensure play could restart.
Ives started to build from the back, but caught in possession on the ground, lost the chance to gain a consolation point.
The final quarter showed the way forward and with the 1st XV resting for a week before hosting Market Bosworth, there was keen intent to practise the good habits in training before then.
Share via
FacebookTwitter
https://www.pitchero.com/clubs
Recent news