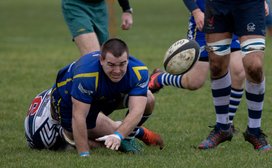 Bulls disappointed to leave with nothing for their efforts

Having been trounced in the home fixture at the start of the season, it was a measure of the uplift in performances that the Bulls left Leighton Buzzard disappointed to have taken nothing from the game.
Some late reshuffling led to erstwhile winger Rick Peters starting the game on the flank, where he acquitted himself well. Chris Williams was welcomed back into the fold for the first time in some weeks and proved his worth with some great turnovers and excellent lineout work throughout the game.
The first quarter of the game was end to end stuff. Buzzard opened the scoring after a midfield break gave them room behind and good hands saw them over in the corner. The try was well converted from out wide.
There was a great response from the Ives as they applied pressure immediately. Buzzard could only stem the tide with a penalty concession which was kicked to the corner. Chris Williams soared in the lineout and dropped the ball down to his namesake Duncan. The patient work up front seemingly inevitably led to a try for the latter.
From the kick off, Ives attempted to exit ambitiously, but lost possession out wide. The ball was scrambled upfield by the hosts and a 5-metre lineout followed. Stung by the try concession in similar circumstances, Buzzard set their own maul well and managed to creep over.
The match was evenly contested for the next twenty minutes with neither side able to gain enough territory close to the opposition line. The Ives pack was gaining the ascendancy in both tight and loose play, however. Great continuity saw them finally get to the red zone.
Again, Buzzard could only prevent scores by offending. From one penalty, a quick tap gave Duncan Williams the chance to bulldoze his way towards the line and touch down at a stretch.
With half time and the game a two pointer, the hosts and their supporters were clearly rattled.
It was therefore a disappointment that Ives let Buzzard strike first in the second half. A turnover in midfield in the opening minutes was swiftly transferred and Ives found themselves behind their posts.
Again, the response was excellent. Maintaining possession well, Ives fought their way up the slope and camped in Buzzard territory. And again, the hosts could only prevent scores through offending at the break down. Ives chose to scrummage three times, finally moving the ball wider and forcing their way to the line, Chris Williams finally surging over to score. Converted by Joe Cox.
With the game now tied, Ives were looking at a considerable upset. A couple of penalty concessions by the Bulls relieved the pressure for Buzzard, and they attacked Ives line. A no arms tackle was penalised and the quick tap by Buzzard got them over before Ives had reorganised.
Being only one score behind, Ives threw everything at the Buzzard defence. Whether it was by fair means or foul (one deliberate knock on to prevent an overlap sticking in the mind), Buzzard held the visitors at bay.
With time running out, Ives were still entrenched in opposition territory when the game finally slipped away from them. A turnover deep in their own 22 led to a strong break out by Buzzard. Hoofing the ball upfield, an unlucky bounce saw the ball ricochet back into a covering Bull and grant the hosts a lineout at the other end of the field. From the set piece, some unusually slack defence allowed Buzzard through to score.
The Bulls continued to attack in search of a fourth try and potentially two bonus points, but they were unable to convert a number of chances at the death.
Whilst defeated, match day coach Max Dominy commented that there was much to be happy about. “We played well for much of that game. When we played to our plans, we had them under a lot of pressure. We have to admit that our inability to convert the chances we created cost us in the end. We’re still moving in the right direction and will look forward to the next matches with confidence after this performance.”
Share via
FacebookTwitter
https://www.pitchero.com/clubs
Recent news