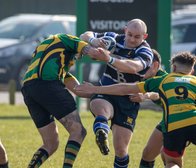 Ives could not have wished for a better start. Playing uphill and against a beguiling wind, Ben Fleming collected a return kick from the start. He immediately fed Cullan Smy on his own 10-metre line. Smy pinned his ears back and took a straight line to the posts between all defenders. The returning Will Mandley added the extras.
Bugbrooke were stunned into action and pressured the Bulls’ defence. The home outside centre, who was influential throughout the match, made a good gainline break and fed for an unconverted score.
The next twenty minutes period was a to and fro affair. Both sides created chances on the outside, but neither could capitalise as chances went begging for want of a decent final pass.
Close in, Luke Basham was showing Ives the way with some excellent chop-tackle defence.
Unfortunately for Ives, a lapse in concentration allowed Bugbrooke to take the lead with half an hour gone. The full back mimicked Smy and took a direct line untouched through the Ives defence.
Again, both sides had chances to wrest the initiative, the next score occurring as the half closed. A well worked lineout move saw Bugbrooke over in the corner. The home kicker finally found his radar and made the score 17-7 at half time.
A high shot gifted the hosts the first points of the half with a penalty in front.
Ives’ pack summoned renewed energy with some powerful running. Tom Woodrow was deemed to be held up as he crashed over.
Releasing the backs, the Bulls pinned Bugbrooke in their 22 with a raking kick. The hooker was rattled as Ives contested the line out and threw in squint.
From the resultant scrum, the Bulls showed some patience and accuracy with driving play. Ultimately, Bradley Robinson was on hand to plunge over the line between the posts, converted by Mandley.
As the game approached the final quarter it was still anybody’s.
Sadly for the visitors, a poor turnover gave Bugbrooke a break down the wing and a wicked bounce landed in the hands of the supporting winger who trotted in to score.
Ives still played with power. Basham was now prominent ball in hand, Alex Henly made breaks and work throughout the pack put the visitors under pressure.
Overplaying left attackers exposed and Bugbrooke’s turnover skills were rewarded with a series of penalties.
With ten minutes left and Ives still believing, a hat trick of home tries put the result beyond them.
First, they made a complete Horlicks of defending a lineout when a cute shout by one of the home pack left Ives standing watching a player stroll through, waiting for a whistle that didn’t come.
A well-executed backs move then saw the winger put in. And from the kick off a swift run saw the third converted try in almost as many minutes.
Ives still attempted to wrest at least a try scoring bonus point from the debris as Josh Dear finished off another wave of attacks, with Henly converting.
Alas, time had expired, and that was simply a consolation score.
Off the pitch, barring some extraordinary events, matters elsewhere appear to have ensured Ives continuation in East Mids. 2(S). Oakham, the side immediately below them occupying 11th spot, were deducted 5 points for a second time leaving them trailing Ives by 15 points with three matches remaining. Ives will want to collect enough points to make the deductions meaningless, of course.
Share via
FacebookTwitter
https://www.pitchero.com/clubs
Recent news