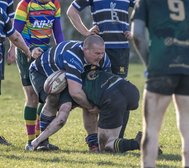 Tough day at the Chicken Shack

If there was any doubt that Vipers are the form team of the moment after defeating league leaders Olney last week, it was quickly dispelled in a powerful performance at the Chicken Shack.
With both sides much changed from the early season encounter which Ives had won on the road, the visitors took the game by the scruff of the neck in the first ten minutes.
An early penalty was followed by a swift transition following a turnover which saw the winger sprint down the touchline to score in the corner.
A further penalty conversion saw Vipers 13-0 up.
There followed a good half of play by St. Ives against the wind. Initially attacking close in, John Paxton was breaking the gainline, supported by strong forward play. Vipers defence held firm throughout.
Ives efforts having gone unrewarded, insult was added to injury when a breakout with the last play of the half saw Vipers extend their lead with a converted try. With an additional penalty, the half time score was 0-23.
The Bulls were stoic in the face of further disruption as the bench was emptied soon into the second half due to injuries.
They spent most of the second half battering the obdurate Vipers defence to no avail.
Again, one skirmish upfield for the visitors, saw them score a converted try.
For the last quarter, Ives were held at bay. Despite numerous warnings about the penalty count, Vipers managed to keep 15 players on the field, all of them throwing themselves into the defensive effort.
Skipper Tommy Newman was realistic after the game. “It’s a disappointing result after last week, but it’s now easy to see why Vipers have won five on the bounce. We’ve a week off and will train hard for the next one.”
Share via
FacebookTwitter
https://www.pitchero.com/clubs
Recent news