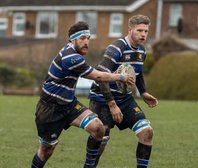 The Bulls bounced back after recent agonising defeats with a performance full of power which eventually subdued a game Stamford side.
From the kick off Ives were into their stride forcing errors from the hosts and a lineout close in. A well worked maul drove to the line for Dip Adams, returning from his enforced absence, to score.
The Bulls were playing into the teeth of the gale, but continued to work hard with ball in hand. Whilst they were unable to find a way through the Stamford defence for some time, the same was true for Stamford. Any possession they had was met with spirited resistance from the Bulls.
In truth, playing with the wind was not much of an advantage as the ball was frequently held up in the gale and knocked on.
The subsequent scrums proved an added bonus for Ives' pack. Ives front row of Bradley Robinson, skipper Tommy Newman and Josh Dear had their opponents’ number. Anchored by Adams and Matt Wood they forced Stamford into reverse gear at will.
The platform enabled Ives to gain territory with back rowers Ollie Bartlett, Rick Peters and Tom Woodrow enjoying the space afforded. Another superb maul all of 20 metres splintered the home defence. The ball was popped to Alex Henly who strolled over the line to score, converted by Mitch Newman.
Stamford were under the pump and could only hold a rampant Ives by offending. Yet another well set drive was illegally downed. A quick tap by Peters took the Bulls to within touching distance of the line. Mike Brennan was on hand to gather and drive over. With the conversion Ives were 19 points to the good.
An unfortunate injury to Bartlett saw juggling of positions up front with John Malings joining the fray. Hoping to see out the half, Ives relaxed a little too much. Having stopped Stamford’s own maul at a lineout, they were helpless to prevent a direct run from the home centre, who kept Stamford’s hopes up throughout the game. The converted try made it 7-19 at half time.
On recommencement, Stanford had their best spell of the game. Some excellent support play and offloading saw them pound the Ives defence, which eventually ceded a converted score.
Despite having played so well, there were signs of nerves in the Ives ranks. A series of penalties at the breakdown granted Stamford territory. Eventually the pressure told and Stamford slid over the line to get to within two points.
Ives responded superbly. John Paxton carried the ball into the heart of the Stamford defence. Henly and Brennan were taking direct runs.
When Stamford did gain possession, they frequently kicked. It was to no avail as the back three of Ben Fleming, Joe Cox and Cullan Smy were covering well.
As the last quarter started, the game was still in the balance. Ives stepped their forward effort up a gear and put the result beyond doubt. Dave Sykes, on for the unlucky Malings after a knock, threw himself into the battle with aggressive running.
After bashing at the Stamford line, Ives’ patience was rewarded as Adams drove over for his second. In the conditions, an extraordinary conversion attempt from wide out was successful. Newman seemed to aim the ball halfway across the pitch, but had judged the wind perfectly.
Ives were buoyed and took advantage with another fine passage of play. Finally able to hold the ball as wide passes were spread, Smy finished well in the corner.
With the clock running out, Stamford were able to score a consolation try securing their own bonus point.
Skipper Tommy Newman was a happy man. “What I was most pleased about was how we adapted to what we saw in front of us. Conditions were not easy, but we showed our strengths and fully deserved the win.”
Share via
FacebookTwitter
https://www.pitchero.com/clubs
Recent news