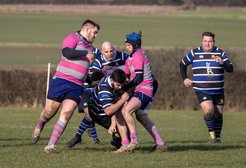 Top of the table Olney taken to the wire

The strong wind was a factor in causing all the points to be scored at one end. But it did not dictate the pattern of the game, which was keenly contested throughout and once again decided by small margins.
With Olney topping the table throughout the season and scoring a huge victory over the Bulls on their own patch, this was once again a demonstration of Ives ability to match the top teams. And they might have taken the result in the last few minutes but fell short, taking just the losing bonus point.
Olney opened the scoring early when loose play at the breakdown by the hosts saw the ball squirt out of the ruck to be collected by Olney to run in unopposed.
There followed a period of Ives pressure. Rick Peters was having a fine game snaffling loose ball to make yards and Shaun Mundy, Matt Wood and Tom Woodrow were all prominent.
Olney’s defence held up and a turnover finally gave them space to hoof the ball downfield and relieve the pressure.
As the game entered its second quarter, Olney gained possession from a turnover inside Ives’ half. Good work down the touchline saw them beat the Ives defence to score. With both tries converted, the visitors were 14 points to the good.
Again, Ives worked hard against the elements, but could not breach the visitors’ defence.
On their final sortie of the half, Olney spotted the Bulls defence was a tad narrow and spread the ball wide to score a third.
The half time score of 0-19 was a little harsh on the hosts.
The second half saw Ives’ pack take a firm grip of proceedings. Loosehead Bradley Robinson was giving his opposite numbers a torrid time at the scrum, both the starter and replacement, and was ably supported by skipper Tommy Newman and anchoring tighthead Josh Dear up front. Olney could only prevent Ives attacks from the good ball by infringing.
Finally, Newman opted for a scrum from a penalty in front of the posts. The Bulls accelerated over the line with Peters dropping to score, converted by Mitch Newman.
The arbiter was losing patience with Olney’s offending and the visiting 2nd row was binned for pulling Woodrow down the lineout.
The Bulls set about making the extra man count with John Paxton and the returning Will Mandley making strong runs.
The last pass was not clicking for the Ives. Olney were indebted to their fleet footed number 18 who frequently danced and wriggled his way from precarious positions near his own line to gain precious yards.
In a repeat of earlier play a series of offences led to another 5-metre scrum for the Bulls. The Olney pack was splintered and the referee had no hesitation in awarding a penalty try and binning the loosehead.
There was now a one score match up for grabs. Playing against 13 men for five minutes, Ives eagerness to make it count led to a couple of penalties against for offside.
Olney were able to relieve the pressure and keep the game in midfield. They were mightily relieved as the clock passed the 80-minute mark.
Head Coach match Max Dominy commented after the game, “It’s another game that we could have nicked, but that is sport. I am proud of the lads’ efforts. We’ll take the learnings from today and look forward to applying ourselves fully for 80 minutes next week.”
Share via
FacebookTwitter
https://www.pitchero.com/clubs
Recent news