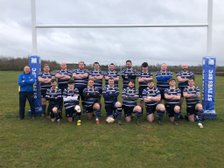 Bulls rampaging performance delights in the teeth of the gale

The Cambs. Junior Cup is contested by those teams who are in the Eastern Counties 2 West league. With Cantabs contesting in various cups at three levels, they put together a strong, experienced 3rd XV to face visiting St. Ives, including two former 1st XV skippers at lock and centre.
Playing into the remains of Storm Gareth (was that an omen for events in Cardiff?), the Bulls, led by a former 1st XV skipper of their own, Jim Robinson, started superbly. Keeping the ball in hand they played with continuity and purpose until an attack of dropsy hit them.
Inexplicably, a series of knock-ons gave Cantabs the chance to push the visitors back into their own half. Still playing with ball in hand, yet another drop gave the home stand-off the chance to collect and canter in for the opening score against the run of play.
For the next 15 minutes Ives attacked, but could find no way through. Jacko Tate was thoroughly enjoying himself thumping opposing tacklers back. Jack Hickman was first to many a breakdown to keep the ball moving.
An unsavoury incident which saw a dazed scrum anchor Graham Moffitt leave the field, also witnessed an excellently managed decision process by the veteran referee, who carded the home transgressor for ten minutes.
The Bulls took full advantage with three excellently taken tries. From the scrum restart, the Bulls played the ball through the hands releasing full back Joe Cox away on the right to score.
From the kick off, Cox was again in the action as he surged back upfield. After some excellent interplay, the ball reached Callum Long who, with plenty of work still to do, swerved and jinked his way past the remaining defenders to score in the corner.
Again from the kick off, Ives immediately ran the ball back. With execution their 1st XV colleagues would do well to mimic, a number of fix and passes led to space for Fin Ruddock to score.
Cantabs were still in the match at this point and came back with a try of their own when still down to 14 men. Another knock on gave them a scrum. The ball was moved right and in a rare series of poor collisions by the Bulls, the centre was allowed through to score.
Half time 12-17
With the elements at their backs, Ives continued to play with the ball close, expertly managed by stand-off Mitch Newman.
Having stretched their lead to two scores with a penalty by Robinson, Newman’s choices to release the forwards or play wider were spot on and paid dividends for the Bulls.
From the kick off, the ball was whipped wide to Long, who skipped down the touchline past flailing defenders, before stepping the full back.
Ives were relentless. Newman spotted the home back three absent and a lovely chip was caught on the full by Cox who ran in unopposed.
Cantabs were determined to come back into the match and attacked through their big men up front and close in. David Sykes, whose calm decision making both with and without the ball settled those around him, was a rock in defence. Ruddock was prominent with a couple of penalty turnovers as he was quickest to latch on to the ball.
Cantabs spent fully 3 minutes camped on the Ives line, but dogged defence kept them out, finally forcing a knock on. Ives ran from the scrum and charged downfield. With an overlap apparent, a Bull decided to go it alone, but was deemed to have been held up over the line.
No matter as the 5-metre scrum held firm for number 8 Stuart Cornwell to pick from the base. Finding nobody in front of him he was able to stroll over for a score.
Back came Cantabs with a further assault on the Ives line. Again, they came away empty handed as the Bulls defence was in no mood to allow their hosts even a consolation score.
Ives broke the siege and the game settled in midfield. A turnover saw Newman chip to the wing where the ball was allowed to bounce. Youngster Max Flint was quickest to react and having collected the ball, barged between two defenders to score.
With the clock running out, there was time for Long to complete his hattrick with another swift run and swerve down the left wing.
Robinson was a delighted man after the match. “This is not a one-off, but a reward for all the hard work in by this group of lads over the past weeks. We came up against some experienced players today and our youngsters showed how well they have bought in to what we are trying to do as a Club. We look forward to Shelford in the league next week, and also the chance for some silverware in the cup.”
Share via
FacebookTwitter
https://www.pitchero.com/clubs
Recent news