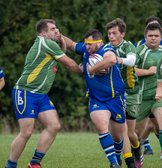 Ives Seconds bring smiles back to the Chicken Shack

After recovering from the 1sts’ difficult weekend, St. Ives 2s put on a stirring display for the onlooking spectators.
Before the start of the game, Walden communicated their lack of front row players. In the spirit of rugby, Ives’ substitute Dan Proctor volunteered to switch shirts to ensure contested scrums for the first quarter at least. He enjoyed the game time so much, that he put in a full 80-minute stint for the opposition. Bravo.
In decent weather, Phil Shire issued a statement of his intent in the opening minutes. Fielding a kick over, he scorched upfield weaving between defenders to score a fine solo try, converted by Mitch Newman.
Joe Cox, enjoying himself at scrum half, made the next break. Swift hands saw Dave Royce-Dexter finish off in the corner.
Walden came back into the game, but were held out by ferocious defence, with skipper Henri Cherrington prominent and, along with Rob Olivier, making himself a complete nuisance at the breakdown all afternoon.
As the clock ticked past the half hour, Ives were still under pressure. Pressurising the opposition attackers, the ball went loose. Joe Cox swept it up and sprinted 80 metres to score. With Newman adding the extras, the half closed 19-0, which was testament to the defensive effort of the Bulls as much as their attacking skills.
The second half started as the first with Ives scoring. This time it was fine continuity through numerous hands before Olivier found the gap to score.
Soon after, Shire was back in on the scoring action with another swirling run which left the visitors defenders flailing.
After a bit of chatter with members of both sides forming close acquaintance, one of the visitors saw red. Upset that handbags has been drawn further down field he determined to join in from distance and the arbiter was left with little choice but to dismiss him.
Down to 14 men and one hobbling, Walden might have folded. To their credit they continued to defend with spirit and attempt to breach Ives’ defence with their own ball in hand.
However, two more good team tries saw Shire complete his hat-trick after receiving the ball in space, and veteran Jack Blackley rolled back the years by being present in support of a long passage of Ives possession to score.
With Newman converting all the second half tries, the result ended 47-0 to the hosts.
With the news that Greg Dale was on the recovery path and the presence of the two “concussionees” on the touchline showing no ill effects, the Club was a much happier place to be.
Ives 1sts return to action hosting Oakham on Saturday 23rd, 2nds travelling to Sawston.
Share via
FacebookTwitter
https://www.pitchero.com/clubs
Recent news