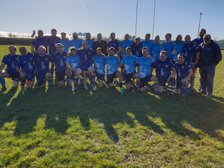 Super Saturday includes a game at the Chicken Shack

On a beautiful spring day, both Ives and Cambs. Police sides were fortified with guests welcomed from as far as Mildenhall and Cantabs to enjoy a friendly in the sunshine. Kudos to organiser Craig Cheetham, who continued to badger players to attend from the depths of Plague Palace.
With an eye on the forthcoming internationals being shown in the Clubhouse, the players agreed a slightly shortened game, which suited returning retirees Graham Moffitt and Michael Drake very well.
The game was an end to end affair. The Constabulary had managed to find a couple of flyers for their wings.
In contrast, Ives played with some able direct running to test the visitors' defence.
It was the fleet of foot that prevailed on the scoreboard, but as always in such fixtures, rugby was the winner.
Share via
FacebookTwitter
https://www.pitchero.com/clubs
Recent news