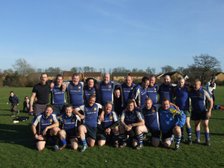 Ives 2nds reign in the rain

It's been a long time coming, but 2nd XV victory is sweet

Gentlemen, raise your glasses and, at long last, toast a victory to the St Ives 2nd XV.

A wet start and windy conditions set the scene for the usually tight encounter between Ivees and Shelford 5s. Ives, for a change, had a good size squad, bolstered by the return of some young development players and it was this that gave them the edge.

The St Ives scrum was also to play a major part as, right from the start, the pressure was on the Shelford defence. A series of unstoppable scrums saw the blues rewarded with a drive over by new to the game David Lace, his first of two tries in both this game and his career.

Jason Gosling continued his excellent kicking form and within a few more minutes St Ives were over again for a 10 v 0 lead. Shelford were not to be outdone, and in a short time had a kickable penalty duly converted to keep them in touch.

Ives however responded with zest and determination. An excellent spell of pressure with 4 lineouts creeping towards the opposition try line led to a maul driven initially by Big Jim Lewsam. The Ives pack powered in and Jim Leyden, Sunbed, Sam Bateman, Richard Miller, Luke Myers and Pete Hammond pushed Shelford back at an alarming rate for Sunbed to put the ball down for try number 3.

Shelford were not finished, and some clever running saw them score under the posts to make it 15 v 8. The pattern of play changed yet again as Ives came back once more, and good defensive work by Shelford from mazy runs from the St Ives backs, Harry Leyden, newcomer James Scott and young Steffen Gosling.

At the turn round, the Bulls were determined to stay in front and prevent a Shelford comeback. Straight from the off, half-time replace Graeme Stubbington, returning to the game after a lengthy absence, shot off and gained incredible distance, ably assisted by young Ross Meagher who collected a pass on the wing and finished sweetly towards the posts.

A similar run on the other side saw Scott in in the top corner. Further tries from Sunbed, James Scott and Jason Gosling (who also converted one) saw St Ives reach an impressive total of 44, with Shelford scoring one back and converting to reach their 15.

Excellent performances all round from the Ives squad produced St Ives first win of the season and capt Jim Leyden patted the younger members on the back for their fine attitude and determination. Elstub, Bateman, Gosling, Leyden, Meagher and young Matt Cowx all deserved the plaudits, but they must bow in reverence (as should we all) to old-stagers Chairman Mark Smy, President Andy Frear and Secretary Nigel West for their own contributions, as well as 1st Team assistant coach Doug Cowx who managed the replacement strategy on the day.

Well done St Ives - a truly fine squad and club effort, and a justified reward for all of the hard work of late. Next week sees Ives Vets host Kettering for those still standing, followed by an all-levels friendly against Rushden and Higham, and the next league encounter on October 25th at home to Cambourne - plenty of time to practice so we can make the points count even further, and a game that must surely be within our grasp.