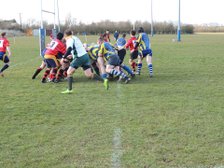 ...but the big result of the day goes to St Ives 2nds.

Saturday March 14th was a great day for English rugby, with Wales beating Ireland and England beating Scotland to leave the final weekend of the Six Nations championship wide open...

But who really cares about all that, when the mighty Bulls 2nd XV can lay claim to their victory of the season, having turned over Wendens Ambo in a thrilling 13-try thumping. In the end, it was a 70-point difference between the two sides, though such a margin looked unlikely at half time.

Indeed, it was very much a game of two halves. The first 40 minutes were led by the Ives pack, with a bigger than average turnout of forwards (in both bulk and quantity) meaning the Bulls could put some serious weight into their scrums. And it showed - not once did the Ives pack lose possession, and in many cases stole it from Wendens in a convincingly powerful display.

Ives opened their account in the third minute, with Tim Lumley-Good making the most of his momentum to scramble the ball across the opposition try line, his determination to get the ball down only matched by his determination to tell us all about it in the changing room afterwards. Another hard-worked forwards try in the eight minute, this time courtesy of Chris Morton, put Ives in a strong position of command by the end of the half's first quarter, even though neither was converted.

But the plucky Wendens side battled hard to make the rest of the first half a much more brutal encounter. Using some clearly well-rehearsed drills among the backs, they broke through a sloppy gap in the Ives defence to score a well-deserved try, duly converted, to put them just three points behind - a situation they held onto until just before the break.

Timing, though, is everything, and it was a Jamie Noble try in the final play of the first half that put Ives back into their comfort zone - again, no conversion, but a 15-7 lead at the break put the home team in the stronger position.

A half-time pep talk from 1st XV head coach Phil Brown, who took time away from his first team duties to give us the benefit of his observations (both during our game and during the England game, screened in the clubhouse afterwards), seemed to give the Ives 2nd XV the boost they needed, as, indeed, did bringing Ollie Bartlett on from the subs bench. The second 40 minutes were a completely different game to the first.

Ives took command of the half very early on, with a neat breakthrough try from Tim Wall, who sidestepped his way around the Wendens defence to place the ball over the line after little more than a minute of play.

It was the start that Ives needed - as the Wendens team clearly started to tire and the Ives pack continued to dominate every scrum (hats off, by the way, to the opposition hooker, who was holding up as best he could with a cracked rib...) the tries started to come thick and fast. Luke Slade was next on the score sheet, converting his own score for Ives first successful kick of the game.

Bartlett was next on the scoresheet, with a trademark solo run bringing home his first of a hat trick of tries, and seemingly finding the key to unlock the backs after a quiet first half. Two more tries in the next 10 minutes saw Steffen Gosling open his account, on his way to being the day's top points scorer - his first of three tries and five conversions (enough for him to get changed early and run away, before the bar was opened), followed by Slaggy yet again, enjoying his first game at scrum half in 'several years'.

Wendens came back into the game midway through the half and defended well against the unrelenting might of the Ives pack, Benni Giglio in particular playing a blinder in his first game for the club since December.

But their defence was short-lived. With Slaggy breaking through in the 68th minute and gifting the speedy Gosling with an open try, the floodgates then opened, allowing Ives across the line four times in the last 10 minutes, with two more tries for Bartlett to complete his hat trick, a further one for Steffen, and a much deserved score for stand-in skipper, Jack Blackley, who was deservedly proud of his troops at the final whistle.

Having been on the receiving end of quite a few big scorelines against us over the past season, Ives' penultimate league game of the 2014/15 campaign should serve as a big shot in the arm as we look forward to next season - but it's not over yet. Next Saturday gives us the chance to avenge Saffron Walden for the defeat in the opening match of the season, while on March 28th we're through to the semi-final of the Junior Plate away at Newmarket - availability to Jim L please lads, as it's imperative we get the best team we can out for these last two 2nd XV games of the year.