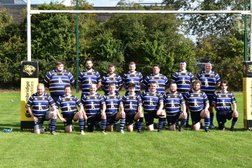 The St Ives score board had a good work out on Saturday as the hosts ran riot in the late summer sun.

The St Ives score board had a good work out on Saturday as the hosts ran riot in the late summer sun. St Ives freshly galvanised by the influx of available players found their way to the try line 6 times to beat Camborne 45 point to 3.

The big news story was the return of Paul Shakespeare returning to his old club; he joined young Gregg Thurston and man of the match loose head prop Steve Burke in a front row that had a stormer of a game. St Ives played literally brilliant in all areas of the game, the support play and the link between the backs forwards was as good as a jam doughnut and a cup of tea on a Sunday afternoon. The pressure from the forwards led to fly half Jim Robinson scoring his first try of the season and inside centre Jamie Noble bagging two tries.

There was a welcome return to young Steve Plum who has been out of action for a while as well as Francis ‘hairy’ Sanderson who showed off some good skills at full back, he has obviously been taking notes from the pro’s at Northampton. The second half saw tries from all three of the Saints back row of N0.8 James Yeomans, Ollie Bartlet who made his debut at Blindside and Openside and Captain Oliver Scott all scoring classic back row tries. It was also good to see Ivon Peplow make a return to the game as winger his bone crunching tackle on the Cambourne flanker sent birds scattering from the nearby treetops.

After the game captain Oliver Scott said, “I was delighted with the performance, everyone gave everything out there today, many thanks to Cambourne, todays game was a hard physical game which we all really enjoyed. The season has now officially started”.