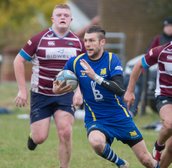 Heartache for Bulls 2nds as they go down in Cambs. Cup in last minutes

History suggested St. Ives 2nd XV would be up against it travelling to regular opponents Shelford 4ths. However, in a superb game for the neutrals, whilst the Bulls will take heart from the match they will undoubtedly think, “So near, yet so far…..”
Playing up the hill, Ives started well and put pressure on the hosts. With an attacking opportunity on the Shelford 5 metre line, Ives lost primary possession. Shelford hared to the other end but were stopped just short and conceded a scrum. Again, Ives lost primary possession and against the run of play, Shelford scored.
For the next half hour the game was nip and tuck. Ives pack had the ascendancy, but good Shelford defence kept the back line at bay.
As the half was drawing to a close, a penalty gave Shelford the opportunity for a lineout 5 metres out. They wrestled the ball over the line to take a 10-0 half time advantage.
The Bulls knew they had to score next and started the second half with much better ball retention and momentum. A Shelford lineout went awry, and Jack Hickman charged downfield leaving defenders in his wake. The ball was recycled quickly, and Mitch Newman darted through to touch down, converting his own try.
Ives tightening up of the game was putting pressure on the home side. A clearing kick was fielded by the Ives, Warwick Brittany sprinting up the wing and bouncing off defenders to score. Converted.
With their tails up, the Bulls took the game to their opponents. Driving play up the right wing by the forwards sent Shelford back. The ball was turned over, but Hickman charged down the clearing kick which saw the ball whipped out to Sam Vivers to score. With the conversion, Ives faced the last ten minutes 11 points to the good.
Unfortunately, for the visitors, the effort to secure the lead had emptied the tank. Shelford’s backs began to run the ball from everywhere and for once the Ives legs were wooden. A lineout on their own line was regained by the Ives, but the home defence knocked the ball from their grasp and a soft try was conceded.
Worse followed from the restart as Ives could not regather the ball. Shelford’s backs combined to complete a length of the field score as good continuity left Bulls scattered across the pitch. The conversion made it a three-point game that the Ives could not recover.
Skipper Tom Riches was disappointed but upbeat after the game. “We came here with high hopes knowing we would face a strong Shelford side. To have come so close against a team invariably at the top of the division shows we are ready to mount a strong challenge as we start our league campaign next week.”
Share via
FacebookTwitter
https://www.pitchero.com/clubs
Recent news