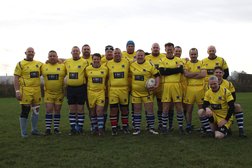 In a bid to shed either family or pounds (sterling) for a day, the Bulls faithful congregated for their annual charity match. This year’s charity was the Oddballs Foundation, which raises awareness of testicular cancer. The Club has already greatly contributed to this worthy cause through the sale of well over one hundred smart Oddballs bobble hats, which were being sported by many, and added a further £125 to the Foundation on the day.
The cold snap has yet to arrive, so it was thus somewhat surprising that the line drawn between Overs and Unders fell at 34, a full 5 years greater than the previous season. Clearly some youngsters were nursing other colds or somesuch.
The age line clearly disappointed a number of wannabe Overs in their early thirties, who were keen to try on the brand new 3rds/Vets kit, supported by CRC Creative Ltd and on its first home outing.
The division of protagonists did, however, lead to a very closely fought game.
From the off, it appeared that the Overs had less regard for their personal well-being, or thoughts of any imminent matches, and thundered into contact. In particular, Williams was keen to track down all those of his colleagues who adopted the swing-door approach to defence.
There was still plenty of time to discuss the volume of mince pies and bottles of wine that had been despatched over the festive season. But those numbers were swiftly forgotten in a plethora of tries at either end.
The game plans of each side, such as they were, were quickly apparent. For the Overs, with a centre pairing of Scott and Thompson and Sharp lightning fast on the wing, the “tuck it up the shirt” or “run hard at the smallest” schemes were oft in evidence.
The Unders had Uni-returnees Nelson and Peacock out wide and thus looked to find space.
Both policies proved effective as the lead changed hands several times.
The Captains, Cheetham and Cox (should be obvious for which team) had opted for a flexible approach to the timing of the interval. They had also opted to include conversions in the score, which was to prove telling in the final analysis.
The Unders were first to crack as, playing up hill and into the wind as is traditional, the previous night’s activities led to parched mouths of the participants. Time was called, the Unders heading for the water and Lucozade bottles, the Overs for a well-deserved port. Or two.
The score at this point was something like 26-18 in favour of the Unders. Approximately.
The helter skelter nature of the contest continued in the second half. The Unders were clearly suffering the arbiter’s failure to notice or acknowledge the four-man disparity between the teams. At least there were thirty players on the field, but the majority were in yellow.
It began to tell as Fahey noticed and began to move the ball wider for a couple of scores.
Calls began to be heard from the Unders ranks. “We haven’t lost this match for 10 years. Come on!” (this claim has not actually been verified).
With minutes left, both teams were informed of the remaining time and the score difference of 7 points.
To even things up still further, the Unders were reduced to 12 men as a trip was deemed worthy of a yellow card.
Scenting at least a draw, the Overs did what they needed and rumbled the ball up to and over the line. With time spent, the rushed conversion attempt (why?) was sliced wide and the game over. For those that were interested (defence coach, look away), it had finished 50-48 in favour of the Unders, conversions included.
Honour was satisfied as the try count was a shared eight each.
The players retired to the bar to regale each other of their magnificent exploits long into the afternoon. #uptheives!
Share via
FacebookTwitter
https://www.pitchero.com/clubs
Recent news