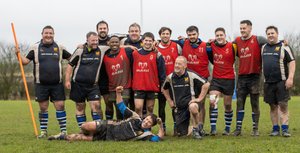 Overs snatch victory at the death

The Bulls once again showed their heart to support a deserving charity on the festive Saturday as nearly £400 was raised for Joining Jack as a result of the generosity of players and spectators of all ages at Somersham Road.
The recent rain made the conditions much more to the liking of the Overs, the line being drawn at 31 years of age as late young arrivals forced some late reshuffling of squads.
The match was officiated by international referee Andy Oliver (Scandinavia, Italy, India and counting).
Despite the damp, Albiee Tayedzerwa was too hot to handle for the Overs as he bagged a hattrick of tries.
The Unders also scored through the visiting Will Nelson, who had been denied an earlier score for an infringement beyond the ken of many.
The Overs had kept themselves in the game with tries from two guests (unknown to your scribe), Paul Ashbridge and an extraordinary effort from veteran Jason Price. He either flopped at the back of a pushover or sprinted 90 metres to score. Ask him.
With time up, a draw was unacceptable to either side. Play continued for the golden try.
Camped in their own 22, returning Josh Meadows showed the generosity befitting the occasion and threw a delightful long pass across his own players. Tommy Newman plucked the ball from the skies and touched down to complete a fine victory for the Overs.
Share via
FacebookTwitter
https://www.pitchero.com/clubs
Recent news